What’s going on with DC Comics?

Two years ago, DC Comics (with the help of Dan Jurgens and Geoff Johns) started down a path that long-time DC fans had been hoping for since the beginning of The New 52.  While we were given just a glimpse into the past with Convergence, when Jurgens’ Lois and Clark #1 was released, a lot of us let out a big sigh of relief.  Superman and his family were back!  Just a few months later, Johns gave us Rebirth, and it felt like we were finally home.  It was not complete, and there was still quite a bit to do for some characters (Legion and JSA, please), but the overall direction of the multiverse seemed to be on the right track.  It was revealed that there was a grand two-year plan, which would bring the “rebirth” part of the story to completion.  The other bookend for that story was Doomsday Clock.

But a funny thing happened on the way to the finale.  Geoff Johns got a promotion.  Sometime in 2016 (just before Rebirth), Johns was named President and Chief Creative Officer for DC Entertainment.  However, DC Comics Co-Publishers Dan DiDio and Jim Lee still reported directly to Diane Nelson, also President of DC Entertainment.  And Johns also reports directly to her.  It appears that he is not a part of DC Comics publishing decisions (if you are looking at an org chart).  Sure, he is still their best writer, and helps to setup and guide a lot of storylines, but in the new role, it became clear that his influence on the comics’ line severely declined.  You could see this when Dark Nights: Metal was released.  Based on putting together the timeline that Scott Snyder (the writer of Metal) has revealed in interviews, it seems that the publishers gave him the go-ahead to start working on Metal at about the time Rebirth was kicking off. 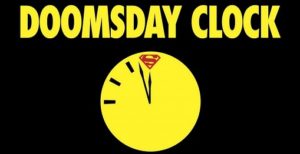 Metal is a universe-redefining event.  I’m going to put aside my feelings on whether or not it is a good event, just looking at what it is designed to be.  If Rebirth was allowed to finish its two year plan, and then Metal followed it as the next era, that would be fine.  But instead of doing that, Metal was allowed to start a few months before Doomsday Clock was to begin.  And then the marketing for “The New Era of DC Comics” began as well, with lots of plan being made public about where DC was going next in the comics.  Except, Doomsday Clock was supposed to be defining that first.

In my opinion, you have a tug of war for where to take the company.  Geoff Johns wanted to take the multiverse back to its roots—something long-time fans would love.  Dan DiDio and Jim Lee would like to turn DC into some sort of Marvel/Image amalgam.  The books they are rolling out feel more like Marvel or Image books.  Scott Snyder even said that he took inspiration for Metal by reading Marvel crossovers and figuring out what made them work.  Yes, he read DC crossovers as well, but his comments keep going back to Marvel series first.  The whole design of The New 52 was more in-line with Marvel and Image designs; Jim Lee was in charge of that look.  And The New 52 failed.  Rebirth worked.  But DiDio and Lee haven’t gone anywhere, and they are not finished trying yet.

Now this is not a Marvel vs. DC argument.  I like books from both companies.  But each has its own unique identity and should not try to become the other.

I love the DC Universe.  That’s my comic book “home”.  But with Metal, No Justice, the New Age of DC, and the Bendis Superman era all happening at the same time, I’m worried.

bendis DCcomics dcentertainment doomsdayclock metal Rebirth
Are you an Insider?News, reviews, & updates are just the beginning.