The Whovian Perspective: Not My Doctor

Hey, fellow pudding brains! How goes the day? This declaration of “Not my Doctor” comes from Twitter.

I sit in awe of this comment and have been attempting to decide which route to take. As a liberal feminist, one of these terms creates a disheartened sigh in my very core. The last time I checked, we aren’t lining up non-female citizens for slaughter.

Feminists don’t want to convert all of your favorite characters or shove more X chromosomes down your throat. What we want is to enjoy our favorite show. The Doctor is an alien with a binary vascular system that can regenerate after death into a totally new body, and that’s not even taking into consideration that he can travel through time and space in a tiny blue box that’s bigger on the inside.

We simply want it not to matter that she’s female. It doesn’t matter that it’s progressive. It matters that we live in a world where it is okay. The Doctor is an inherently “different” and unique character. Why should gender even matter at this point?

Some worry that this will ruin one of the few healthy, male role-models. To which I say, a role model is a role model. They aren’t taking a role model from boys. They are showing that a woman can be just as amazing. My boys have plenty of role models. I expect Jodie Whittaker to be another one very soon! 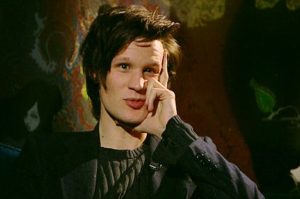 So let’s just get that settled and get back to Who. For most Whovians, regeneration is an emotionally tumultuous process. The last time I dreaded a regeneration was when Matt Smith was announced.

No way… Not my Doctor

Young and pretty, he tilted his head in either embarrassment or modesty during his announcement interview. He had no idea what was about to happen. There was no way that this person would be able to fill the shoes of Ten, even sandshoes. I watched his first episode and thought that I would never watch again when he put on the bow tie.

What is this phenomenon that takes a show about hope and change and creates irate fans at the mere mention of a major transition? At the core of this show are progress, change, compassion, and acceptance. Why is it so hard for us to accept these changes or accept a new incarnation of the Doctor when history has proven that most of us will come around by the time the season ends?

We are invested. We watch for years the happiness and heartbreak that is the Doctor’s life. Whether it is the death of a companion or a wedding to a psychopath, the Doctor’s character is one that is complex and as real as a time-hopping alien’s can be.

Much Grinding and Nashing of Teeth 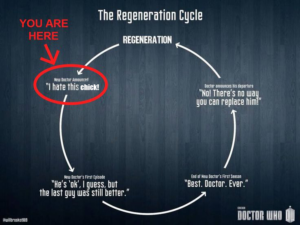 Basically, this is what we do. It’s a cycle that is all too familiar to any Whovian. We begin to see this incarnation as “The Doctor.” No one will ever be able to command the room like ______ (pick a Doctor). Until they do. One episode, he is putting on a bow tie and the next trying to save the beast below, and you know that things will be okay.

Some it takes longer and others not at all. For most though, it’s a thing and always will be. Matt Smith was too young, and Capaldi too old. Now, there is a woman.

If you are upset about a new Doctor, I get it. I really do. However, try to keep it more about the tragic death of a beloved character and less about boobs. Do boobs really matter when there are more important things to worry about?

I know some of you may balk at that, but I’m deadly serious when I say that I’m more upset at the tragedy that after all this time, the Doctor is still not a ginger. Why not? Is this not the more important issue?

By getting so bogged down in this gender issue, we’ve completely forgotten what’s truly important: that no incarnation of the Doctor ever goes or does simply what is wanted. All of them go where they NEED to go and do what they NEED to do. None of that includes being ginger, and that’s just criminal.

Until next time, make it a good one and be amazing!