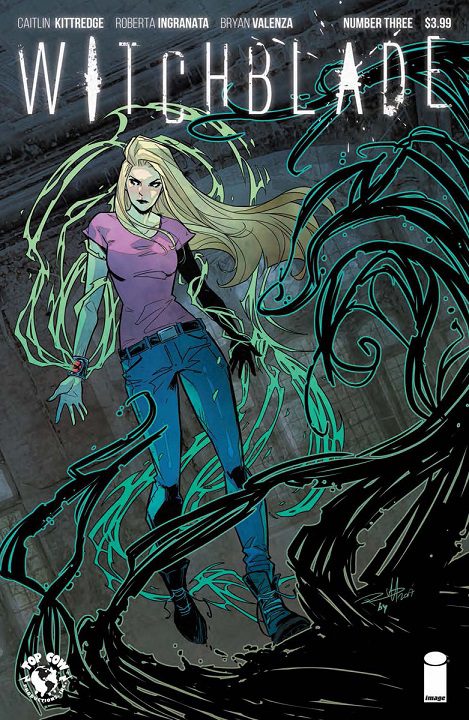 The new issue of Withcblade continues to give us a balance of the weird supernatural occurrences happening around our main character Alex Underwood as we also learn a bit more about her past and why she acts the way she does now. I’m very much enjoying this balance since Alex is new to the Witchblade series and it helps new and old readers get invested in a new character. Seeing how events turned out while she was on an old job in Afghanistan while working with an old friend was quite a huge tragedy to in her life but it explains the parts of her depression that we see in her as she can come off as a cold person.

The description on how she deals with her grief and how she just buries herself in her work to keep her mind off of it lets us know that she is pretty much in a dark place in her life and having all of these other weird things happening to her now could only add more weight on her and I won’t be surprised if she snaps in someway. I look at her now hoping to see that she will learn to come and embrace the power of the Witchblade so that she can stop the monsters she is fighting, and not just the obvious looking ones that want to take over other peoples bodies. The work she does dealing with these types of cases where she sees monsters very frequently, it would require someone to be strong-willed but her past haunting her could cause her to give up if cases don’t turn out the way she would hope such as the last one she recently dealt with. Now with the power of the Witchblade and finally seeking some help on learning to control it, I think we’re going to see Alex breath a new fresh of life in herself as she now knows she will not be able to do something for herself and others when caught in a bad situation.

Alex is truly the star of this new run. Sure, the Witchblade powers when in use are cool to see right now but they wouldn’t mean nearly as much to me without someone like Alex who is shown to fight long before these powers have came. She is tackling these powers now as she tackles life and the people she runs into in her job. She doesn’t back off and goes in headstrong.