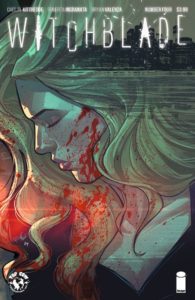 Witchblade #4 has things really ramping up with Alex coming to terms on learning how to control these new powers that she has. We begin to see her change in attitude on choosing to finally somewhat embrace the powers of the Witchblade as she wants to help get rid of another demon that has caused major trouble for another woman. Even though we still don’t get the Witchblade in her full form in this issue, I’m enjoying the slow burn of her coming in tune with her powers and they don’t waste any pages of opportunity for us to learn more about Alex and her past. We get a small bit of her story in her much younger days and it seems to be truly haunting experiences that may have occurred. This is interesting as this may have been the start of her push to be a tougher person in her life. We don’t know all the details yet but what we’re lead with points to nothing good. The brief history we get about the Witchblade was a nice touch that I’m sure tie-in to the previous series.

Seeing how I am enjoying this run so far, it may lead me to pick up older runs with some of the settings that they mention the Witchblade was in. One 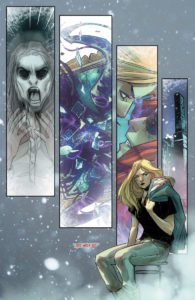 of my favorite parts in this issue is by the end of it she decides to face whatever demon spirit that’s been causing trouble and she has no fear in sight. It wasn’t that long ago where all of this was new to her. Shoot, it’s still all very new to her but every encounter she comes across she shows that she’s always willing to fight for her survival and for others. I don’t know if the Witchblade is someone to be thought of as a hero. Alex is someone that doesn’t seem to think of herself as one either. But with this power along with what she tries to do for people for a living, I think she will grow into being someone that can see that all things aren’t dark in the world. Especially when there’s someone out there to fight it.

This run is still early on and I imagine it seems to be offering something different and new for fans of the series. I hope this build doesn’t turn away readers as it seems to finally be bringing in things together in the next issue.