Marvel’s favorite six clawed mutant is back with a brand new series in February 2020. Coming off of the events of House of X and Powers of X Logan is now the defacto protector of the Mutant nation of Krakoa, standing against those that would exploit the island nation’s resources.

This new series that was announced at NYCC 2019’s “Dawn of X” panel is being executed by writer Ben Percy and famed former Wolverine artist Adam Kubert.

Percy said at the panel, “We all have that character. The one we love more than any other. The one we treasure in books and movies and maybe memorialize with a T-shirt or tattoo. The one we relate to as a cracked-mirror version of ourselves. For me — as a growly, grumpy, hairy, smelly, muscled, flannel-clad, whiskey-swilling loner who lives in the woods of the frozen north — it’s Logan. And though this might sound corny, it also feels right to say that writing Wolverine is a dream come true, a childhood fantasy realized. No kidding, bub.” 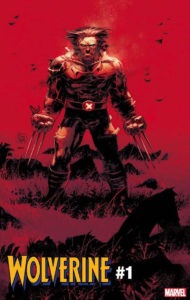