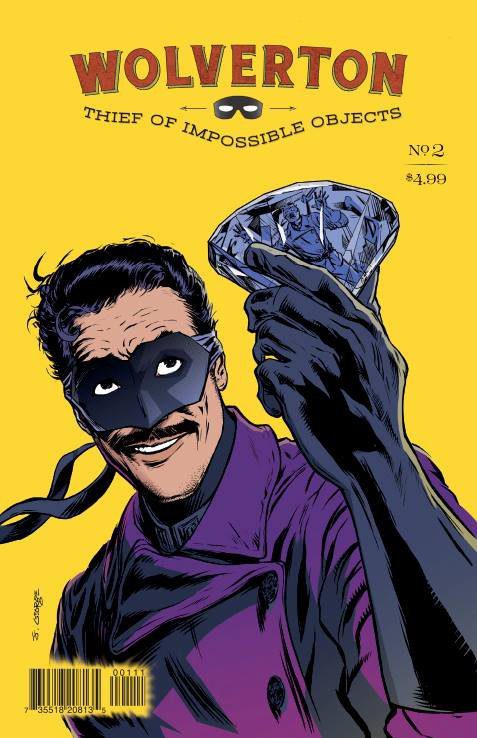 The first thing readers will notice about Wolverton #2 is the stunning cover by Josh George. It succeeds in simplicity. The illustration of the titular character is rendered wonderfully and equally important, the colors pop. These elements combine to grab your attention. Also worth noting, it also serves as a nifty, yet subtle, homage to Captain America #115.

Set in the early 20th Century, Wolverton aka The Black Cat is a master thief living a life of adventure and intrigue. Wealthy, handsome and arrogant, he’s cut from the cloth of silver age film stars. This installment his sights are set on stealing the Hope Diamond, but it’s no easy task. Between competing with the evil magician Dorian Gray, avoiding capture by Scotland Yard’s Inspector Munroe, and possibly contending with himself, Wolverton’s hands are quite full.

Writers Michael Stark and Terrell T. Garrett take us on a FUN adventure. With plenty of action to be had, plus a fair amount of humor and romance, the script provides the reader with a full meal. Incorporating figures from literary lore, like H.G. Wells, as main characters is also a really nice touch. While cinematic in scope, it’s not a heavy story thanks to it’s optimistic and lighthearted tones.

The interior art chores are handled by Jackie Lewis. Initially, I wasn’t sure what to think not being familiar with her style nor the feel of the comic in general. Yet as I read on, it became apparent her work is a perfect fit. Like the script, the pencils aren’t crowded or too busy. Lewis handles the pacing well, providing enough depth to the action sequences while also maintaining consistent line work throughout the book. Lewis is an artist to keep an eye on in the future.

Overall Wolverton #2 embodies a quality shared by many great comics; you’ll walk away entertained, happy, and with a desire to know what’s next. My lone gripe comes in the form of continuity, or more appropriately despite notes in the narration boxes, not being completely sure of his motives at the beginning. Thankfully this is ironed out as the issue progresses, yet I wonder if this was due to the original story being translated from screenplay to comic book form. Still, a minor complaint compared to what ultimately proves to be one heck of a yarn.

Available in print copies and digitally, I must highly recommend the physical product. This is a sturdy book. Even more so than what you would receive from a major publisher. I’m no fan of modern glossy paper stock, but Wolverton is built to last. At the price point of 4.99 USD, not only will you get your money’s worth in content, the manufacturing of this comic is absolutely flawless. There was obviously a lot of love put into Wolverton #2, and it shows from tip to tail.

For more information or to buy, visit www.wolvertoncomicbook.com