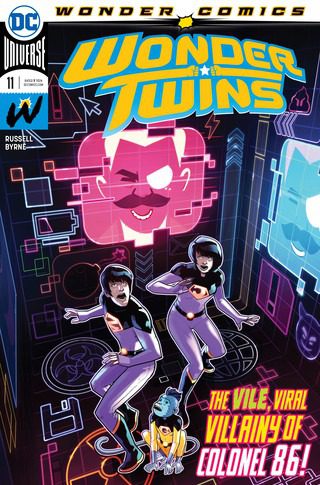 The Wonder Twins. I only know them from the cartoons of old, and, well, they weren’t very serious superheroes. But I have a fondness for them, so I had to take a gander at a modern comic with these two (and Gleek) as the headliners.

The story is an oldie but a goody. Technology taking over absolutely everything! But the twist is nice… old tech taking over, and seeing modern tech as a mistake. A whole movie or Netflix series could be made from this premise, so… the Wonder Twins? I must admit, they’ve become a bit more believable as superheroes since their Hanna Barbara days. Thankfully Gleek only appeared on the cover. I’m sorry, but I’m not fond of the monkey side-kick.

The art was great! I notice all the superhero comics of today tend to have a very similar style where they try to keep gritty and streamline appearance. However, with that said, it’s nice to see the Wonder Twins in a more sleeker appearance. Their outfits are more modern, and their physical features look more Twenty-First Century.

I enjoy when not so serious characters finally get their day in the spotlight, and I quite liked this comic! Remember that whole period of time when Aquaman was the butt of everyone’s joke, and he was a goofy character in all the cartoons? But now Jason Mamoa is Aquaman and we can’t do that anymore.

Fingers crossed the Wonder Twins get their due, soon!