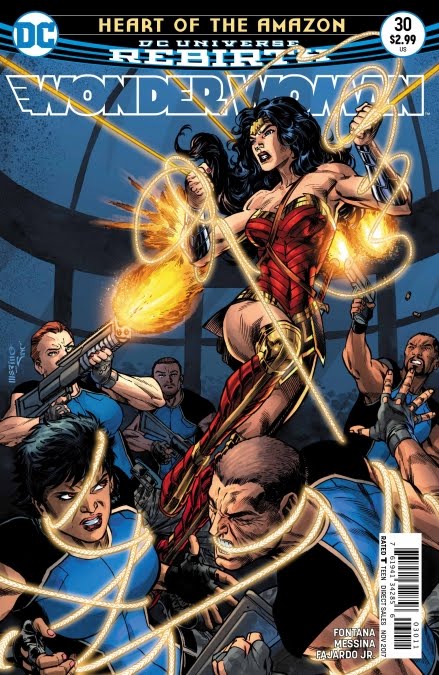 Wonder Woman must weigh the option of how to best make use of her powers to help humanity and comes face to face with the man who wants to use her blood to make super soldiers.

Coming off of Greg Rucka’s fantastic run on Wonder Woman, it felt like it was an act that would be too impossible to follow. Though it was far from perfect, Shea Fontana’s run was able to recapture the heart and essence that made Diana such an amazing hero in Rucka’s run. She again was a selfless hero who would be willing to sacrifice herself for humanity and the greater good.

I had some problems with the plot. Her blood having the ability to create super soldiers and possibly heal humanity’s illnesses seems like a huge deal, but I have a sneaking suspicion that it’s never going to be tackled the way it should. But maybe the two remaining soldiers at the end are a tease for a bigger storyline. In this issue, certain things felt rushed through or brushed aside. Like the soldier who wanted to be a superhero and was inspired by Diana. She was introduced and redeemed within a few pages. The payoff of the story conveyed such a powerful message, but it was a bit of a struggle to get there. 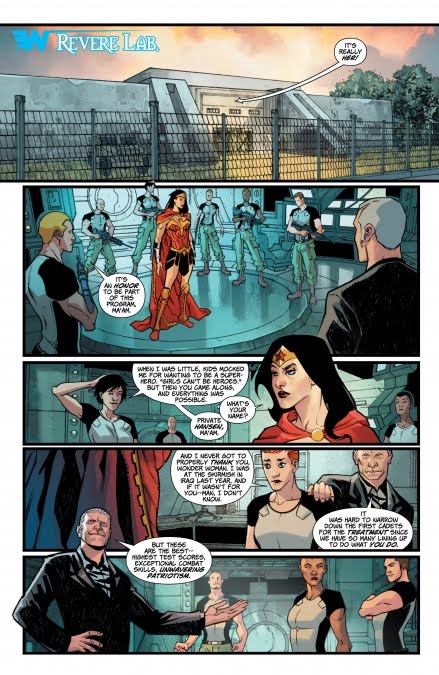 I wasn’t a big fan of the art at first but it did slowly start to win me over. David Messina does well wi action sequences, I actually wish there were more of them for him to draw. I’m more frustrated with there not being a consistent art team since the end of the last run. I hope they settle on a team and don’t usher in new people every story arc.

Overall, this issue and entire story arc had its bumps in the road, but it was enjoyable. By the end I felt somewhat short changed about the revelations of her blood. Nitpicking aside, this did have a spot on characterization of Diana. The message may have had a less than perfect delivery, but it displayed exactly what Wonder Woman should be about: hope, love, sacrifice, and doing what is right. It’s hard to get too mad about the comic book science of it all when the character is portrayed so perfectly.