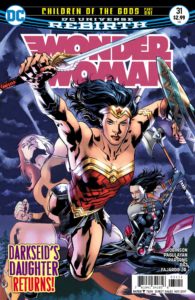 Grail is on the hunt for Gods of old because her father Darkseid is in need of life force.

In a story no one asked for but needed to be told, a light will finally be shed on Wonder Woman’s twin brother. This is a thread picked up from Geoff Johns’ Justice League Darkseid War, Grail is hunting down old gods for their life force to feed to her father so that he may grow back to full strength. Darkseid is hungry.

This issue had a better structure than anything from the last story arc and revealed a lot of interesting tidbits about what’s to come. It was dialogue heavy, which isn’t always a bad thing. The problem is that this issue centered around four conversations, and each one was a bit awkward and long-winded. The setup for this arc was clearly rushed through, but perhaps that’s a sign that this storyline has much to cover, and so far it has piqued my interest. 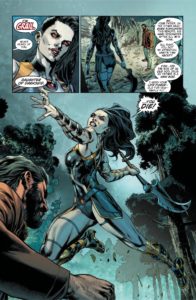 The artwork was pretty good, the characters faces displayed a lot of emotion. Their stances were a bit stiff in action, but the characters did look great. Even though this story involves Darkseid, I was pleasantly surprised that the colorist kept the right tone for a Wonder Woman comic book. It was very bright and colorful, even kid-Darkseid.

The conversations felt unnatural at times, and not up to James Robinson’s typical standards. He’s had some excellent runs, on some big comics. Even so, this appears to be a major plot point for Wonder Woman, and perhaps the beginning of a change in her status quo. How this ties into Dark Nights: Metal I do not know. Last we saw in Metal, Darkseid was still a cute and evil looking baby, here in Wonder Woman #31 he is a child.

Darkseid Grail james robinson Wonder Woman
Are you an Insider?News, reviews, & updates are just the beginning.