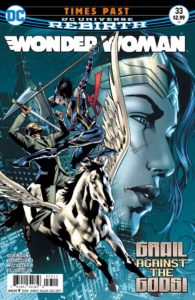 Grail is on a mission to bring her father Darkseid back to full strength. She must kill every child of Zeus to accomplish this, including Diana’s brother Jason.

It’s actually refreshing to see some of the backstories behind Grail’s time with baby Darkseid being shown. This was basically a Grail one shot, that really helped to progress the long-running Darkseid plot-line. There was a lot more humor than I was expecting and a ton of great battles. Emanuela Lupacchino did a fantastic job on all the fight sequences. She gives every character she draws such string characteristics. Much like Starfire, Darkseid’s flaring red eyes were a constant. And her take on the god’s contemporary fashion was great. There was plenty of things to like in this issue. 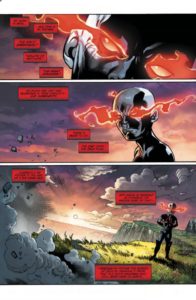 These past two issues have been solid, but I can’t shake the feeling that the current storyline feels more like a tie-in than it does a Wonder Woman story. On one hand, it’s good to see them reference the events that occurred during Dark Nights: Metal, but on the other hand, it makes this story feel small and irrelevant by comparison. If Jason dies at the end then there was a huge build up over nothing. But no one really wants to see Wonder Bro join the Justice League either.

It feels like James Robinson has been dealt a bad hand, and is doing his best with what he’s got. The back and forth between Darkseid and Grail was surprisingly charming and Wonder Woman #33 hit every plot point that it should have, but it’s just hard to get excited about the core concept.

Darkseid Grail james robinson Wonder Woman
Are you an Insider?News, reviews, & updates are just the beginning.