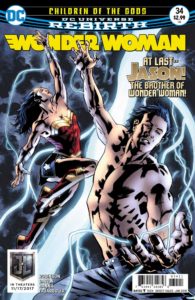 Wonder Woman has finally been reunited with her twin brother Jason. With Grail hunting down all the children of Zeus, their reunion takes a surprising turn.

The story opens with an Amazon secretly smuggling Jason out of Themyscira. He is given to the god Glaucus who raises him as a fisherman. This issue surrounded Diana and Jason getting to know each other, which was suppose to give the twist ending a little pop. But instead, most of it was tedious to get through, with dialogue that assured you would see the ending coming from a mile away. We as readers just don’t know Jason enough to care about him or his fate. There were, however, positives to take away from this issue. 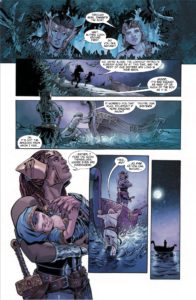 The artwork shined during the action sequences. Also, character’s physical features played a small role in the story and artist Sergio Davila did a good job of making certain facial features pronounced enough to differentiate the two twins, while still making them look related. Only thing is, I kept wishing Jason would put a damn shirt on, I’m sure it was cold when they’re so close to the sea.

Story-wise it doesn’t look like Jason is going to bog down the Wonder Woman series like some had worried he might do. Diana wasn’t acting herself, and that will probably change going forward. This whole baby Darkseid storyline seems more like a Grail story than anything else. And writer James Robinson writes her quite well. She may be the daughter of Darkseid but she has a sense of humor, and she’s a fierce warrior. Grail is the highlight so far and will probably be the biggest takeaway.