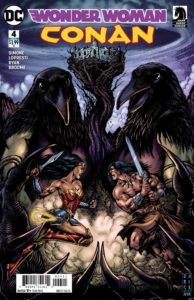 As Diana looks for a way to regain her memories while Conan reminisces about his old childhood crush. Elsewhere, the Corvidae plot a way to get back at the two warriors for refusing to fight each other.

This has been the epic fantasy type story I’ve been hoping to get from a Wonder Woman comic book. Surprisingly, it comes in a crossover with Conan the Barbarian. Unsurprisingly, it’s written by Gail Simone who continues to weave an action-packed and sometimes romantic tale of two warriors from different worlds meeting. Diana is not herself and is being put in situations that are new to her, yet the essence of Wonder Woman shines through. Be it humorous moments after she’s had a few too many drinks, or be it Diana laying a beatdown of men who disrespect and threaten her. 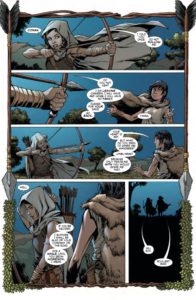 The flashback scenes are still my favorite part of the comic. Aaron Lopresti’s borders really help differentiate between past and present pages. Young Conan and Yanna have such great scenes, filled with both action and intimacy. Lopresti, along with Matt Ryan and Wendy Broome bring the world of Cimmeria to life. This is continually one of the best-looking comics out.

The Convidae’s plot to turn these two warriors against each other seems like a difficult task. Usually, it’s the heroes that are faced with such resistance, but Conan and Diana’s bond has quickly become quite strong. The character work in this series has been excellent, not the just the main characters either. Wonder Woman/Conan does an excellent job of sucking you into its world and making you want to live there forever. These issues are never long enough because you never want the story to end. Never expected this crossover to have such a grip on, I don’t think there is a better comic book on the market. Not one that delivers on all creative fronts so consistently. This is a brilliant series and a Wonder Woman story that will be recommended to new fans for years to come.