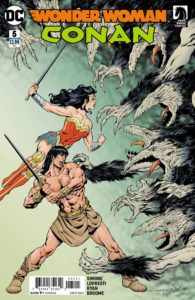 Themyscira sends their greatest warriors to the world of Conan to save Diana.

There was a bittersweet pair of announcements coming out of Marvel this past week. Conan the Barbarian will be leaving Dark Horse and headed over to the red team. Which means there will be no sequel to this brilliant mini-series in the foreseeable future. Wonder Woman/Conan writer Gail Simone, will be headed over there as well but to write a solo Domino series for Marvel. They clearly haven’t been reading this crossover because I’d be throwing a new Conan series at her after what she’s accomplished.

The story is winding down now and the Amazons have sent their own little Suicide Squad to save Wonder Woman. Though we don’t spend a lot of time with them, they’re highly entertaining and a lot of fun. I’d read a series about them. How they learn of Diana’s predicament and travel to other earths is never fully explained but I appreciate not bogging the final two issues down with comic science. I love the pacing of this series, it never feels rushed and it allows you to enjoy the quieter moments, yet so much as happened. Allowing scenes to breathe highlight the subtle humor reverence Diana and Conan have for one another. The Corvidae’s big reveal put the warrior’s newfound friendship to the test, the result was sad to see but understandable. A Wonder Woman written with a warrior mindset might not have been so understanding of the situation but Gail Simone’s Diana is written to perfection and inspires throughout. 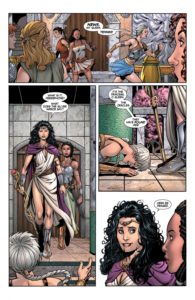 There are two colorists listed but I didn’t see a huge difference in any of the pages. The only the noticeable thing was the brightness. Some parts seemed brighter than others, specifically the Themyscira panels. That probably has more to do with creative choice and not lack of continuity. Other than that, Aaron Lopresti and this art team have turned out some fantastic work. They’ve created a world consistent to Conan and Wonder Woman. Also, the Corvidae transformations are total nightmare fuel.

By the end of this issue, the gods have left Conan’s life in disarray and he doesn’t have many people to turn to. The last page is a somber yet inspiring one. It’s like some sort of sick joke that this creative team makes us fall in love with the characters and the merging of these two worlds only to find out this crossover will more than likely never happen again. They work so well together. Focusing on what we are getting, this series has been amazing every issue and I’m excited to see how it concludes. You can make a long list of the amazing stories Gail Simone has written, but this one may be at the top.