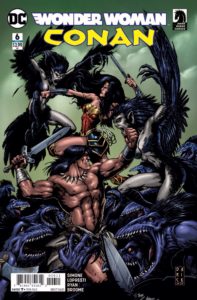 Diana has returned to her Themyscira filled with guilt over leaving Conan to battle alone. Only leaving behind her lasso and one of her bracelets to aid him.

The day I’ve been dreading for months now has finally arrived. The sixth and last issue of this epic mini-series is here and it gives us a bittersweet but overall satisfying conclusion. It is amazing how well Gail Simone and Aaron Lopresti were able to merge the worlds of Conan and Wonder Woman. The series worked so well that it’s a shame we will probably never get this crossover ever again.

If you needed any more proof that Gail Simone fundamentally gets Wonder Woman as a character better than most other writers, then this issue will put that to rest. It wasn’t just the fact that Diana felt guilt for not being able to finish and Conan’s fight, but this issue highlighted what makes her so special – she inspires. Her influence on Conan was felt throughout his battles as well as his effect on the town he was protecting. Yes, he got to be the brutal barbarian, but by the end, he was someone for the people to look up to and be inspired by. That’s what I loved to see from this mini, not just seeing the merging of worlds which put Wonder Woman in an epic fantasy setting, but also the merging of concepts as well.

Aaron Lopresti had a lot to play with in this finale. Plenty of bloody battles and creepy creatures from start to finish. The action sequences are also a joy to read. Since issue one, his artwork was able to strike the perfect tone for these two characters to meet. Looking back at some of the older Conan the Barbarian issues, Lopresti was able to have both worlds meet halfway. It truly was a lovely looking comic book. 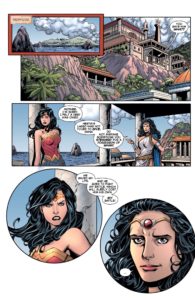 I thought the ending was very fitting for what was set up early on. Not only the final battle but also the aftermath. Not to give too much away, but I was reminded of the film The Butterfly Effect. The movie is an incredibly depressing(but great) movie that deals with alternate timelines. Not quite the same here, but it had a similar vibe.

When you look back at an ending, it can make or break our perception of how good it actually was. Well, the first page was just as amazing as the last. Everything about this series was so well done, it is without a doubt the best executed company-crossover ever. There are some fantastic crossovers between publishers, but none have felt this natural. Wonder Woman/Conan was consistently the most interesting issue I read the week of its release and it’s no different now. Kudos to Gail Simone, Aaron Lopresti, Matt Ryan, Wendy Broome, and Saida Temofonte for putting together such a blockbuster comic book.