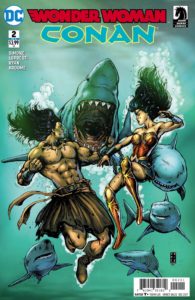 The slaver Dellos, has two of the greatest warriors chained up in the pits. So naturally, he has the two fight it out for the crowd’s enjoyment.

Gail Simone can’t get enough credit for the work she’s doing on this crossover. She has seamlessly brought two worlds together and has done such an amazing job that it feels almost natural. If this lasted beyond the miniseries I’d totally be fine with that. There’s so much that takes place in this issue: the awesome flashbacks, the fight between Wonder Woman, and their journey on the sea, but it never feels rushed. The pacing is impeccable for this issue, and the use of narration for the ship journey made that whole sequence feel dreamlike. Simone is such an excellent storyteller, she truly shines in this issue.

I like how the relationship between Yanna and Diana is explained without blurting it out and killing the tone. Also, I may not know much about Conan’s world, but I totally caught the Red Sonja reference. Perhaps another crossover for another time. 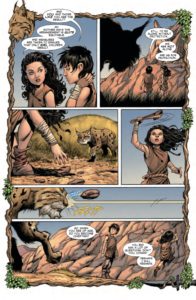 The art continues to be superb with Aaron Lopresti providing such clean line work that doesn’t lose the grittiness of Conan’s world. The ink and colors help capture a tone that is fit for Conan as well as Wonder Woman.

Everything in this series has been pitch perfect so far. The back and forth between Wonder Woman and Conan has been fantastic, with hints of romance. The action is of course fun, but it’s the flashbacks that tie things together so well. It all feels so natural, I really don’t want it to end. Right now, this is the best Wonder Woman comic book on the market.