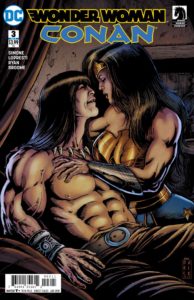 Wonder Woman and Conan are able to escape the clutches of pirates only to find themselves swimming for their lives in shark infested water.

Allow me to start off by saying that I absolutely love this comic book. There have been some fantastic crossovers in the past, but this may already be my favorite. The only negative I can give, is the fact that this mini-series is already halfway through and we will be getting only three more issues. That’s not nearly enough. The storytelling accomplished by Gail Simone and Aaron Lopresti has been superb.

This issue had it all: sword fighting, romance, Wonder Woman and Conan choking out a shark. It was all so lovely. The Corvidae finally revealed their plan to see two of the greatest warriors fight each other. It never quite works out the way they want it too, in most part due to a romance that is brewing between Diana and Conan. Amongst all the brutality, Gail Simone has done a wonderful job of telling the sweet story of Conan’s first love Yana, which adds romantic tension between him and Wonder Woman. Neither of them seems love-struck and out of character, it’s handled delicately. It makes me want to read about the two characters swooning over each other while they slaughter their enemies all the time. 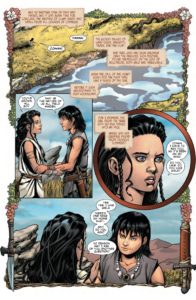 The art continues to impress. One of my favorite aspects of this comic is the panel borders during the flashbacks. They consist of vines, flowers, and daggers. It’s some of the more creative panel layouts I’ve seen. The pencils are very detailed, especially when the sisters morph from their crow forms to their human bodies. The hybrid panels are definitely nightmare fuel.

I read a lot of new comic books to review and for fun, but Wonder Woman/Conan may be the best of them all. There is maybe only one other comic I can think of that brings me this much joy every issue. What an epic mini-series this has been.