Season 3 Episode 6 ‘If We Make It Through December’ Review

Welcome back to Purgatory Paul’s own little corner of the Ghost River Triangle, bringing the Weekly Wynonna run down! This week is a very special Christmas (more like Earpmas) episode. Now normally outside of the 90’s sitcom realm (I’m looking at you Friends) I’m very wary of Holiday, especially Christmas, episodes for shows. They’ve always seemed to find a way to be clunky and hodgepodge the crux of the show with the thematic holiday event aspects and just never find its groove. So I was a bit wary going into this week’s episode, however I have to say, in Emily Andras we trust because not only did this week’s Wynonna Earp not get drunk off spiked eggnog and wander off course, it delivered an utterly exceptional episode with some of the best lines and moments in any show ever. Absolutely nothing can stop the ceilingless talent and flawless execution that is Wynonna Freaking Earp!

From the opening seconds, we are treated to some trademark Wynonna Earp adorableness, from Wynonna’s Christmas onesie and her Risky Business slide, to Nicole’s pouty reveal of her elf costume to Nedley’s Santa and Waverly taking the necessary steps to turn her girlfriend’s frown upside down. Wynonna digs into her box of X-Mas decor for some festive earmuffs to drown out the very vocal soundtrack of Waverly taking Nicole’s mind off her elf attire (another checkmark for Team Earp’s LGBTQ representation on TV having one of the most loved same-sex couples on air very loudly getting it on off-screen). While Nedley loses a child to a randomly appearing Bulshar (the Purgatory Krampus to Nedley’s Santa) the Earp sisters talk Mama (side note – Megan Follows is a damn national treasure and is in rare form in this episode) into talking about Waverly’s father. Not much additional is revealed other than his name is confirmed as Julian, he was good to Michelle, Waverly was born out of love but then Julian disappeared. 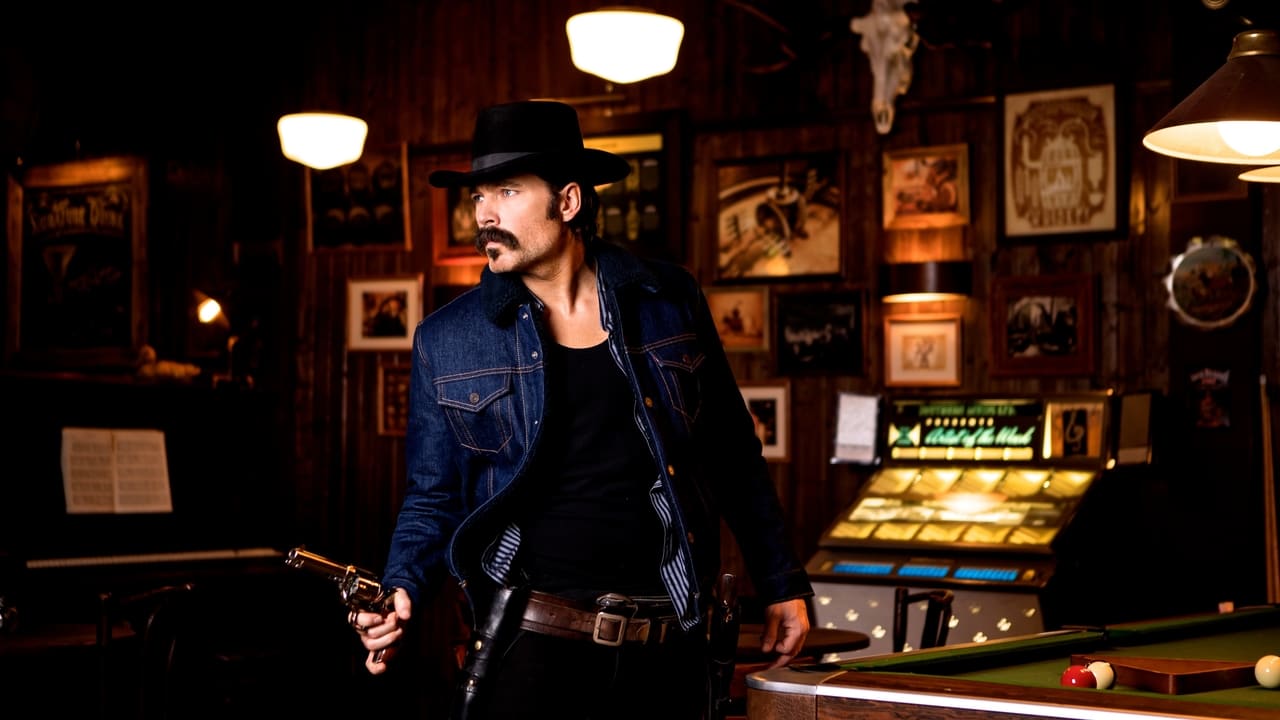 Doc attempts to bring the holiday cheer in the form of a tree but Michelle kicks it out in fears of mites and Jeremy rejects it due to allergies. Doc senses Chetri’s mopey demeanor and pries a bit to learn he’s down over being ghosted by Robin (though we later learn he’s actually been held by Bulshar after he was kidnapped by the demonic Aubrey II at the end of 3×04). I would like to point out that Tim Rozon’s INCREDIBLE portrayal of Doc Holliday is amazing for quite a few reasons, but among the biggest of reasons are his care for the team and his being unphased 50% of Team Earp Being from the LGBTQ community. It’s quite telling that the 166-year-old gunslinger who was disgusted by Champ’s jeans, mesmerized by windshield wipers, and terrified by cell phones, has absolutely zero reaction to Waverly and Nicole’s relationship or Jeremy’s pining after Robin. Having a character who is nearly 200 years old treat the homosexual relationships on the show the same as he would any heterosexual one is a brilliant touch by the writers shooting a hole in the acceptance of bigotry of any kind as ‘that’s how things were back then’ or ‘that’s how I was raised’.

While Wynonna investigates the missing child she encounters Charlie (Sebastian Pigott) a fire services officer assisting with the search. After discovering that a Wynonna has a team and saving her from a falling tree branch, he tags along to the lab. Earp and Holliday then go visit Kate (AWKWARD) to try and find out why Bulshar is interested in the first families of Purgatory. Waverly visits Bobo demanding to hear about the day she was born, Del Ray mentions coming across Michelle who, on the verge of passing out, begs Bobo to protect Waverly. Upon hearing the name, a memory ignites in the Revenant, flashing back to Wynonna’s spirit walk visit to the then human dying Del Ray who proclaims her an Angel and when asked her name is told ‘Waverly’. So it leads to the question, is Waverly’s father Julian truly a wing and halo Angel? Or does Bobo refer to Waverly as a descendant of an Angel because of his encounter with time traveling, fake name giving, Wynonna? It is also noteworthy that as a result of her actions with Bobo, Wynonna was literally protecting her baby sister from the moment she was born.

A clue discovered by Nicole leads the pairing of Wynonna and Charlie to infiltrate Bulshar’s prison, lending to one of the best montages ever! Wynonna wielding Peacemaker and Charlie with an ax, taking out Bulshar’s workers (who look like creepy, haunted beekeepers mixed with demonic Minions) to a remixed version of Jingle Bells, complete with Wynonna delivering a ‘Merry Christmas ya filthy animals!’ now, this is how you do a holiday episode! As the kidnapped first family members are returned (unfortunately not before Bulshar has already escaped and an unknown number of the victims were force-fed seed looking things and a green slime like liquid) fans are treated to the reunion of Jeremy and Robin who cement their mutual feelings with a kiss. While that is taking place Nicole meets with Nedley, trying to get him out of his funk. Nedley, beaten down and tired from the constant battle against evil, makes the announcement that he is retiring and promotes Nicole to become Sheriff Haught! 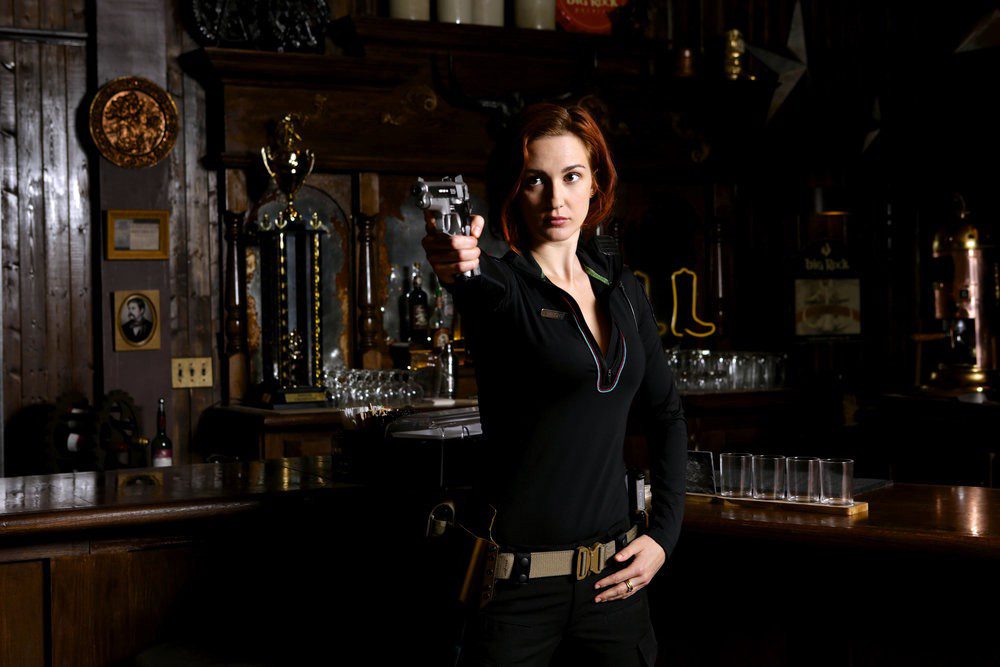 With the missing families reunited, Team Earp finally gets to sit down for some damn Christmas dinner! After a touching toast to the memory of Dolls, Nicole’s promotion, and Jeremy not being ghosted, we are treated to one of the simplest, yet most beautifully delivered lines on television. After Haught thanks Michelle for the meal, Mama Earp responds with ‘Nicole, thank you for making my Waverly so happy.’ It’s delivered so effortlessly, without intensity or drama, without unnecessary excessive pauses, by not drawing extensive attention to the line, further intensifies its power. In nine words Michelle Gibson simultaneously seriously acknowledges and accepts her daughter’s sexuality, shows her appreciation and approval of her daughter’s relationship, expresses her gratitude to Nicole for looking after Waverly’s happiness, dm accepts Nicole into the family for all intents and purposes. Just an exceptionally beautiful moment, not overhyped to be an ‘oh look what we did’ spectacle, which further cements Wynonna Earp as the most progressive show on the air.

As dinner ends the group splinters and many different avenues take place. Waverly celebrates Nicole’s promotion with a part seductive part giggling mess of a dance and beautiful song rendition, leading to more WayHaught soundtrack for the rest of the Homestead. Wynonna, struggling with feeling worthy of Doc, seeks attention in the arms, and fire truck, of Charlie. Michelle confronts Bobo, seeking where to find Julian, offering him Christmas leftovers and a freaking rope to escape out of the well! Lastly, Doc finds himself consoling Kate who fought off Bulshar’s Minion Bee Keepers, ultimately asking for Kate to do what she’s always craved, exposing his neck, craving immortality, he accepts Kate’s vampiric bite with a bemused ‘Merry Christmas to me’!

So so so much happened throughout this episode. Team Earp has completely quieted my fear and aversion to Christmas themed episodes. The emotional roller coaster of happiness and laughter, sorrow and tears and frustration and yelling at the tv, jam pack the hour of SyFy in a league all their own. Many people love this show for many different reasons, myself I simply am enthralled with this incredibly well-written show an exceptional cast. Their ability to work so seamlessly with one another, no coupling on screen having weaker interactions than another, managing to make a very comic book premise (making sense as it comes from a comic book) come across as feeling so incredibly real is just a huge huge huge testament to the writers and cast who work tirelessly and truly invest every fiber of this being into this show is reflected every second of every episode.

I truly advocate for everyone to watch this fantastic show. I believe that it doesn’t matter what kind of shows you normally like, there is something within Wynonna Earp that will resonate with everyone. There are not many shows that I can recommend to EVERYBODY without hesitation but without question, this one tops my list. For those of you keeping up with my humble reviews of the happenings in Purgatory, who is your favorite character? What has been your favorite moment or episode? What is it about Wynonna Earp that resonates with you? Tune in next week for another adventure with Team Earp. Until then, Merry Earpmas to all, and to all a good night.