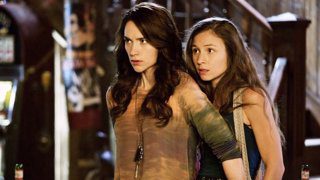 Welcome back to Purgatory Paul’s Weekly Wynonna  Recap! After last week’s unlucky adventure of Wynonna and Nicole leading into the huge reveal that it was Nedley that has rescued Nicole after she escaped the Cult of Bulshar massacre, and the emotional confrontation between a Wynonna and Doc, this episode was facing an increasingly steep uphill battle to maintain momentum. Somehow the Revenant shooting bad ass and her team of adorable psychos managed to do it again. Another incredible episode that for all intents and purposes focused around a very unique concept, dinner. Yes, dinner can be a building block concept for a riveting, exciting, suspenseful, emotional hour of television, if that doesn’t speak to the talent of the cast and writers for this wonderful show than I don’t know what to tell you.

This week’s Earp-scapades begins with Wynonna teaching Jeremy how to play pool. Quite a few things to point out from this simple on the surface scene. First, it is a very refreshing role reversal to have the woman teaching a man, regardless of the relationship they share, how to do a thing, especially playing pool, just one more small, subtle progressive moment from Emily Andras’ phenomenal team (more specifically Caitlin D. Fryers this week). Secondly, make specific notice, not just that Wynonna is wearing Bulshar’s ring, which she was ‘gifted’ by Doc, but that its on her left ring finger – the layers upon layers of potentially inferred subtext, growing even larger by the end of the episode, make you wonder if this is a throwback, foreshadowing, or a coincidence cruelly made to look like something more by the writers. Lastly we see Wynonna hiding Doc’s new Vampiric state from Jeremy, that Jeremy is reducing his relationship with Robin to a text based level in efforts to hide him from Team Earp’s weirdness, and that Wynonna has been ghosting on Charlie’s texts despite telling Chetri to squeeze the proverbial juice out of the metaphorical lemons that are his relationship with Robin. All of that occurred in maybe 2-3 minutes, between two characters, centered around a Pool lesson – this is a prime example of just how fantastic this show’s team is, the vehicles they can use and the information and feeling they can portray through them are incredible.

When Charlie arrives at Shorty’s bar, Chetri makes him aware of the hiding Wynonna’s presence who sends her friend away to lock up Bulshar’s ring before embarrassingly talking to Charlie, ultimately asking him out to dinner. Out in the salt flats Bulshar proves that caressing a book is super creepy and raises the body of his deceased wife, the Stone Witch herself, Constance Clootie, reattaching her head and sending her on a mission for him. Kicking off our first of three dinner attempts, Kate has abducted a ‘local jack ass’ as a meal for Doc. Aggravated, Count Docula insists he hunts for himself and leaves, resulting in Kate straddling the rude victim before ripping his throat out with her teeth. Easily the most sensually frightening vampiric kill since Interview with the Vampire.

Robin is on the phone with Jeremy while he patrols the woods, cleaning up trash. As Chetri tells Robin about the BGD (Big Gay Dinner) the couple were invited to by Waverly and Nicole, a hunger drunk Doc attacks Robin while Jeremy can only listen in horror over the phone. After biting Robin’s arm, Doc stops (due to the rotten earth taste, which he mentions more than one and everyone ignores) quickly rushing him over to Jeremy. Glamoured from the bite, Robin is in a haze – telling Doc he smells like sex tobacco, and believing he was attacked by an albino squirrel. Between the shock of learning what Doc has become and the anger over him attacking Robin, Jeremy berates Doc. The scene  is quite heart wrenching because of the bond Jeremy and Doc had formed before, resulting in a huge amount of hurt and legitimate sorrow on Doc’s part in response to the feelings of betrayal Chetri is expressing.

Wynonna and Charlie’s dinner at Purgatory’s finest restaurant (an all day breakfast serving Chinese Italian joint that has wine, breadsticks, and knives that look like tiny swords — 5 Stars from our Earp Heir) is interrupted by Jeremy who tells Wynonna of Doc’s attack. Chetri is furious that Doc bit his maybe kind of boyfriend, when even he hasn’t gotten to bite his maybe kind of boyfriend yet. Wynonna lures Doc to Shorty’s where Charlie traps him in a rope circle soaked in holy water, while Earp goes to confront Kate. The Tarot Reading Vampire invites The Heir to take a seat and hear her story, proclaiming Doc is actually responsible for her becoming a Vampire. Kate comes from a European Nobility family (a beautiful line about the people who write the history books leaving people that look like her out of them) and started her relationship with Doc after he helped her send away a customer that Kate refused to perform a reading on.

Doc and Charlie trade insults with one another until they’re forced to team up by the corpse of Constance Clootie. Charlie rips her arm off and Doc sends her flying across the bar with a punch to the heart. The two load her into Doc’s car and drive out to the well, unfortunately they leave the trunk open and Clootie’s corpse steals the car, waving her detached arm out the window, middle finger in the air, providing for a hilarious scene, amplified by Doc’s refusal to shoot out the tires – not wanting to hurt Charlene (his beloved car). As the two run back towards town, Doc begins to faint and loose control over his bloodlust, requiring Charlie to knock him out.

Still stalemated with one another, Kate tells Wynonna that she left Purgatory looking for a brighter future. Her love for Doc brings her back, finding out Clootie has cursed him with immortality and hidden him away. This lead so to Kate becoming a Vampire so she can search for him. At this point, Clootie shows up, rummaging around, appearing to be looking for something of Kate’s. Unable to locate it, the zombified Stone Witch leaves, at which point Kate realizes that Bulshar sent Clootie to seek out the Tarot cards she refused to read for him over 100 years earlier. 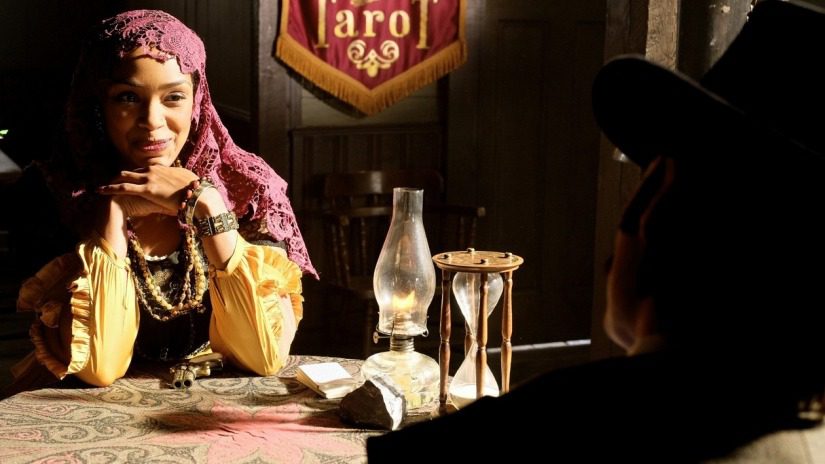 At the Homestead, the WayHaught Big Gay Dinner gets ready to begin, but unfortunately is cut short by some incredibly strange occurrences. As Robin and Waverly prepare the sides, Robin’s eyes glass over and asks Waverly if she ever wondered what a Potato thought about while it was in the ground. It appears he does all the time, which he emphasizes by licking the potato, yes, he licked a potato – easily the strangest sentence I’ve written. While Jeremy is talking to Nicole, Bulshar’s ring appears inside of a biscuit, startled she drops it and when she bends down to pick it up, Waverly walks in assuming she’s being proposed to. When Waverly is told the truth of the ring, the disappointment on her face is obvious – don’t worry Waves, I’m sure Nicole has a princess cut ring being guarded by her cat at home waiting for you.

WayHaught and Jeremy follow Robin out into the barn, who has taken his shirt and shoes off, is kneeling in the corner and scratching at his arm murmuring about trees. Robin snaps out of his daze right in time for Clootie to arrive, after throwing Nicole aside she manages to steal the tarot cards Doc had stolen from Kate’s table in the flashbacks. Bulshar’s ring turns white hot and begins burning Haught’s leg through her pants. Without a thought Waverly puts the ring on, adding magic resizing to this ring’s features fitting Bulshar, one of his widows, Nicole, Doc, Wynonna, and Waves that we’ve seen so far. Fueled by Bulshar’s ring, Waverly unleashes a finishing move punch worth of a Mortal Kombat ‘ Waverly wins – Fatality’ announcement, unfortunately after Clootie leaves Waves realizes that the ring will not come off.

The Stone Witch delivers the cards to Bulshar, showing him his future. Wynonna and Kate find Clootie, too late to get the cards back, but put Constance out of her misery (marking the third time Peacemaker has turned blue). As Charlie gives Doc some blood he had received from a paramedic friend, Wynonna has Kate read her cards – theorizing that the curse has the Earp line and Bulshar linked. Waverly, still unable to get the ring off her finger, discovers that a word in Aramaic has appeared on the ring. Wynonna bursts in proclaiming the cards, revealing that Bulshar is seeking out the First Lovers (Adam & Eve) more specifically the Garden of Eden as Jeremy translates the ring word to Paradise. Robin enters the room, having learned from the trees that Bulshar has already found the Garden.

The episode draws to a close with Kate informing Wynonna that she became a vampire for Doc, but that she’s lost him as Doc has become a vampire for Wynonna, then makes her exit. Seeing Melanie Scrofano and Chantel Riley share a lot of time on screen this week was fantastic, their banter was effortless and gut bustingly funny and was simply a joy to watch. As Wynonna confronts Doc in the barn, he reiterates his decision was made with Wynonna and Alice in mind. It seems like there was going to be a mushy moment preparing to occur before the two were interrupted by Bulshar who blows a strange white dust into the camera.

It does not get any more ominous and creepy for the fate of next week’s episode than a sadistic demon blowing mystery powder into the faces of our heroes. If the preview for episode 9 gives any indication this is going to be mind blowing at epic proportions and make Jolene’s head games look like a walk in the park. Team Wynonna hits it out of the park yet again. Tune in next week- same Earp time, same Earp channel as we dug into the last third of the season with episode 9!