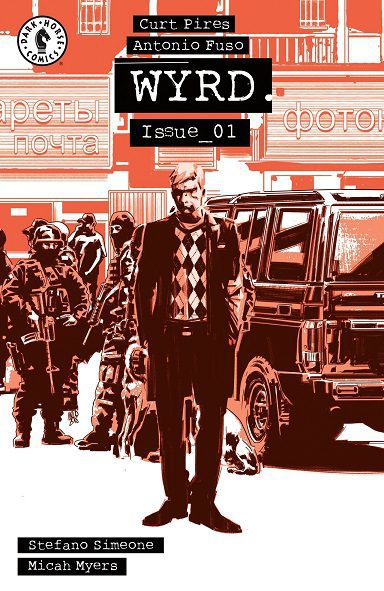 WYRD is the new series by Curtis Pires and Antonio Fuso from Dark Horse. We are introduced into a world of the supernatural and government conspiracies straight from the beginning. It’ll be interesting to see how it is managed as this is the same publisher as Hellboy.

The story itself feels like it’s been recycled so often that it’s not different in any way from the original. We are given hints of Captain America, John Constantine, Hellboy, and Fables. Normally comics with this much overlap either handles it very well or falls apart horrifically. Judging by the art and story, I am going with the latter.

The words are bland and not organic feeling. The main character Wyrd (we think) goes to Ukraine and either everyone speaks English or he speaks perfect Ukrainian. Their interactions are static with no emotion and just feels like what someone who Google translates a conversation from Flemish to English. The confidence in the word choices are not there and it is very evident when Wyrd and the soldier talk about the mountains.

The art tries its hardest to mask the subpar story but fails in many areas. One of the major flaws is the main character is almost similar to John Constantine. Blonde hair, smoking, and wearing a cheap looking suite. The major difference is Wyrd wears a sweater instead of a trench coat. A few moments it felt like a classic Hell Blazer comic.

Some of the saving graces’ are that the story does have potential. The writing needs to be fleshed out better and have the characters use a full emotional spectrum. The art already nails giving characters individual traits, it just needs to extend to the main players not just the ones in the background. Overall the first issue didn’t impress or inspire to anything other a flimsy halfhearted effort. The lack of emotion and character development hurts the story. In the end it feels more like an outline than an actual story and when they figure it out WYRD has a lot of potential to be good.