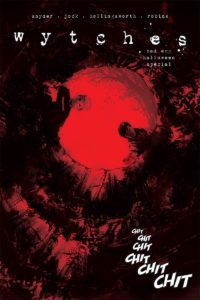 The current master of horror comics is back, with this one-shot story of the great series Wytches. Scott Snyder and Jock give us a taste of what we have been missing since they wrapped up the volume one back in 2015. With this one shot, we are given a taste for what’s to come in 2019.

This issue gives us a bit of back-story for the first volume and helps set up the new series. One of the major focus of this series is to introduce more of the Irons and wytches dynamics. It wasn’t a straight horror like the first volume but it was a good mixture of horror and mystery. The important thing that they did was not bog it down and make it mandatory to read.

Snyder is in his element when writing dark themed stories. Going back the writing wytches helps showcase his range from his current DC comics. The way the story is constructed helps keep it interesting and allows readers to get a feeling for the upcoming volume.

Jocks art fits this series perfectly. With his style, it adds to the emotional spectrum that accentuates the dreed or suspense.  He handles all the different settings the Snyder throws in and it doesn’t alter anything from his style.

The biggest drawback from this issue that it’s not long enough. It gives us a taste and makes you want more. You realize how good the series is and forces you to read volume one to be hyped for it again. This gives us a good understanding that the next volume is going to be good. Hopefully.