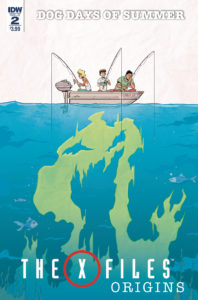 Welcome to another Summer adventure with Mulder and Scully.  Jody, Matthew, Corin and Chris bring us another great double issue of X-Files Origin. The art in this series is delightful and the stories are riveting.  It is good to see people respect franchise characters, and be able to put their own twist on things. When you are reading the mysteries that our main characters go through, you can start to see how it formed and shaped them. I could see this becoming a popular cartoon series.  It is a shame we do not have Saturday morning toons anymore. But on to the stories:

Fox is spending the summer of 1974 in Martha’s Vineyard. In issue 1 things were already getting weird. The strange 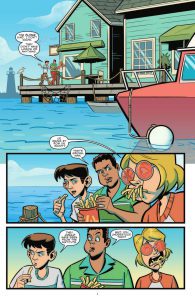 events that were easily explained away by adults. Their answers were not good enough for our your Mulder, though, and we should be thankful for that. Because of his keen senses, and ability to keep ansking the right questions, we learn that there is more going on than meets the eye. Maybe it is just oceanic disturbances, but if you are a fan of the original series, you are probably assuming something more… extraordinary.

Things are not going much easier for Dana in 1977 San Diego. Not only does she know too much about a murder, she is also the key witness to a plane crash. Just like Mulder, Scully goes around asking questions, and she does not take “I don’t know” as an answer. She knows that there is something bigger going on and wants to bring the truth to light. In the true vision of the TV series, while Mulder’s adventure seems out of this world, Scully’s seems more grounded. The only spoiler-ish question I am going to leave you with is, who is Mercy?