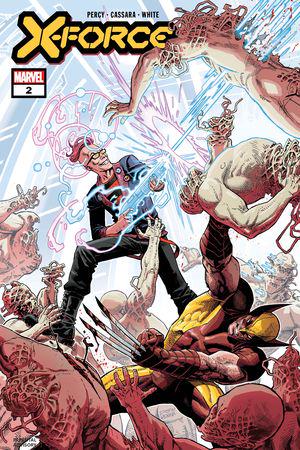 After the surprise assassination in issue #1, (no spoilers) Wolverine is on the hunt to track down the humans that have struck down a fellow X-Man. This is Wolvie at his badass best. He is hot on the trail of the killer enhanced humans when he is unexpectedly joined by Kid Omega, A.K.A. Quentin Quire. Together the two uncover what Logan calls an “assassin factory, where enhanced humans are being printed and produced en-mass. The two fight an army of half-baked anatomy lessons gone wrong and stumble across the fate of fellow mutant Domino…it’s not looking good for the mutant whose power is luck.

Meanwhile Beast and Jean Grey are trying to dissect and interrogate the assassin that was left alive on Krakoa, with mixed results. Through their study of the dead intruders, they discover that every part of these humans has been designed to infiltrate and kill… down to their teeth; which carry explosives, to their ears; which carry wires that can be improvised into garrot wires!

Quentin Quire has always been a take it or leave it character for me, even in his early days when the character first appeared in Grant Morrison’s run. Here, however, the teen punk is showing a mighty big God complex as he has fully invested in the new role of mutants in the world. His cocky attitude is now turned up to eleven and paired with a pissed off Wolvie is just the right mix of fire and ice to make an interesting team.

Watching the rest of the team on Krakoa perform an interrogation and an autopsy at the same time was the kind of high drama that the X-Men have been missing. Percy has found a way to infuse some heart and character into each mutant he writes and the story is all the better for it.

Cassara’s art is a joy to look at. His style showing the influences of Francis Lenil Yu, Marc Silvestri, and former X-Force artist Jerome Opena. His layouts and panels are expertly laid out and the action is fast and violent.

The colors that Dean White is providing for this title are the real stand out though, as this palette of washed-out greens, blues, pinks, and purples provide a visual aesthetic that makes the title stand out from other X-related offerings. The coloring also serves to strengthen the artwork which is the end-goal for every colorist.

This comic is shaping up to be the sleeper hit of the X-Men relaunch. Watching Wolverine get back to the business of being a cranky, deadly bastard is putting the character right back to his roots and fans will love it. Surround the Canucklehead with a decent supporting cast and you have a gem of mutant-infused love. This one is a ride worth taking. I can’t wait to read more!