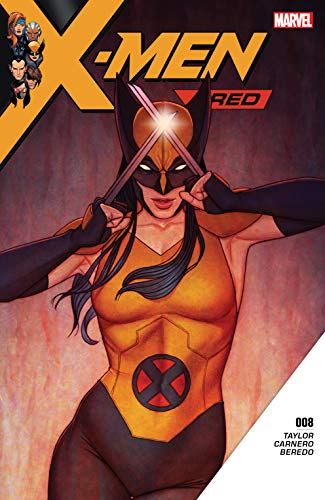 X-Men Red #8 opens with an awesome newsroom scene where the lead anchor is reporting about the audio Jean Grey released, revealing Cassandra Nova’s anti-mutant plot. Her co-anchor or guest (not sure) continues with his anti-mutant rhetoric, implicating it could be a mutant plot. She responds by acknowledging Jean’s point that, if this is all true, Nova would have manipulated the public, to which he responds, “Do you think I’m being manipulated?”

This is where the lead anchor shines, stating, “I don’t know. It’s hard to tell, Mason. You’ve always been an ignorant, hateful @#$%.” SHE SWORE ON TV!

Not all heroes wear capes or have superpowers, remember that.

Outside of that, the issue focuses on the group stopping Nova’s Plan B, which requires Jean, Trinary, and Honey Badger linking minds. And they use Honey Badger to take on the pain, as Logan and X-23 would. The only difference between her and her relatives is Honey Badger can’t feel pain. Which is why when Laura initially steps forward to take her sister’s place and Jean explains why she went to Gabby instead, Gabby says, “Yeah, I imagine her constant screaming would be distracting.”

So the greatest lines of X-Men Red #8 came from a news anchor and a kid. Love it.

My favorite visual came towards the end when Storm laid ABSOLUTE siege to Nova’s hideout on Genosha.

This is one of the more cinematic-type scenes I’ve seen in any issue or anything in a while when Nova steps out and witnesses the tidal wave coming her. Awesome artwork from Carmen Carnero and Rain Beredo, both of which did well with the entire issue. Very much a fan of how Carnero illustrates all the characters, especially X-23, Gambit, and the bearded Nightcrawler.

My one knock on the issue was Trinary’s monologue about all the hate on the internet that she’s protected the world from. I don’t have a problem with her mentioning it in general, but it seemed a bit forced here. Kind of messed with the flow of things. The X-Men are always great about social consciousness, but it’s their subtle way about it that I’ve always appreciated. This was a bit too on the nose, but a small piece in another good X-Men Red issue.