Year of the Villain Hell Arisen #2 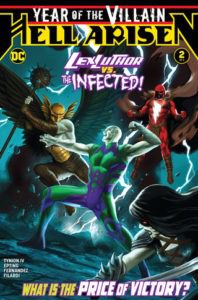 The Infected confront Apex Lex and the supervillain enlists a familiar face to solve his newest problem.

Lex is attacked by the Infected and manages to utilize his surroundings to stop them long enough to detonate his building on top of them. Unfortunately, Supergirl leaves him with both an ominous warning and a head full of doubts about his loyalty to Perpetua and his mission.

Looking for a place to hide out and work the next part of his plan, Lex’s previous assistant Mercy Graves discovers that Lex has been using her apartment as a satellite base for years. After paying her to keep quiet, Lex sends her on another mission while he goes to infiltrate the Hall of Justice in order to extract a sample of the infection from a captured Jim Gordon.

James Tynion IV lays out an interesting and entertaining story in this issue. There are so many great character moments and the interaction between Lex and Kara is some of the best dialogue in the book. His self-doubt is an interesting character trait that I would love to see explored more. The Batman Who Laughs seems underutilized in this issue and a lot of the menace of the character has been stamped down. He’s gone from scary to interesting, which isn’t good frankly. I continue to be interested in this story and where it’s going, but there are a lot of aspects that are diminishing that interest over time.

The art by Epting and Fernandez is fantastic. All the characters look fantastic and the action is great throughout.

DC comics James Tynion IV lex luthor steve epting year of the villain
Are you an Insider?News, reviews, & updates are just the beginning.