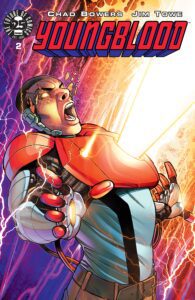 It seems that we live in a world ruled by remakes.  We see it in movies, television, and even in comics.  While it does seem to bother a lot of people in the real world (just read any comments section on YouTube or Reddit) the characters are rarely, if ever bothered by it.  Here is where Image Comics’ Youngblood differs, in this comic, some of the heroes do not want to see this name return.  In issue #1 we were reintroduced to the universe in which Vouge, Doc Rocket, Gunner and the like are our superheroes.  We learn very quickly that a superhero by the codename Man-Up is missing.  Youngblood REBORN is set in our modern age and introduces us to a new superhero app.  The app, very creatively, is named “Help!”, a Yelp!/Uber-style app that lets you rank the person who came to save you.

Issue #2 starts out with Man-Up is still missing, but a team is being formed to find him.  The name of this group of vigilantes?  Youngblood!  That is their hope, at 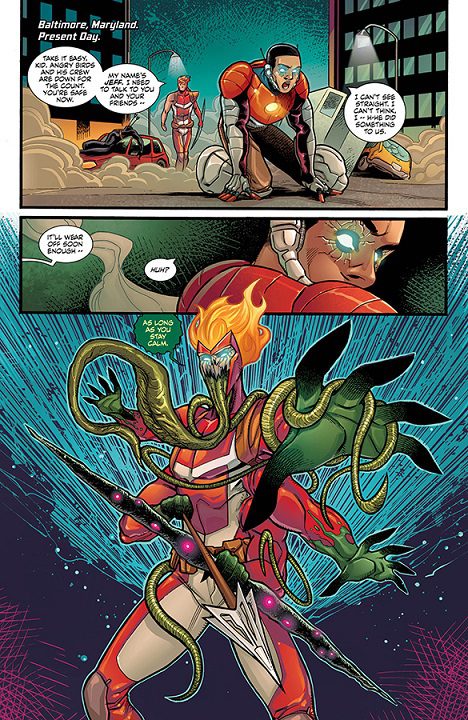 least, not everybody is thrilled to hear their choice.  There is a lot of push-back from a few of the original members.  The goal was to leave the Youngblood name in the past, forgotten to the ages.  The problem is, heroes like Gunner see the power and goodness still in that name.  Will their optimistic attitude be enough to get the band back together?  Only time will tell, but it is looking really good by the end!

If you are a fan of the original Youngblood series from 25 years ago, you are going to want to add this to your collection!  If you are looking for a new team of champions to cheer on, Youngblood may be just what you are looking for.  It gives us an original take on the superhero with a familiar look.  The writing of Chad Bowers is very engaging and Jim Towe’s art should be framed.