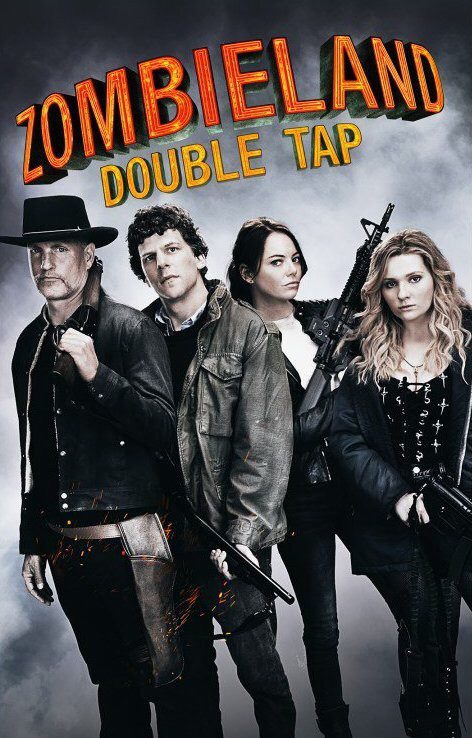 The first Zombieland released back on October 2, 2009. The intervening ten years were a decade which saw its featured actors gain Academy Award nominations (and in Emma Stone’s case, a win), its writers go on to work on one of the most successful superhero franchises out there, and an abortive attempt at an Amazon series before we finally were able to see its sequel, Zombieland: Double Tap. After ten years, it’s natural to worry about the overall quality of the film, the enthusiasm of its stars, and whether its brand of irreverent humor would still feel relevant. Fortunately, the final product is a perfectly entertaining piece of zombie filmmaking.

If there’s a strength here, it’s the actors. All four of the principals involved still are a joy to watch, and enjoy a breezy rapport that is enough to carry the film between its bombastic action sequences. And what action sequences are they! While the previous Zombieland was certainly no slouch in this department, Zombieland: Double Tap’s action sequences have a darkly cartoonish inventiveness that wouldn’t be out of place in an Itchy & Scratchy episode.

The characters are, unfortunately, more flatly written than they were in the previous film. Where once we saw Tallahassee and Columbus (Woody Harrelson and Jesse Eisenberg) actually have some depth beyond their archetypes of angry redneck and awkward nerd, here the notes they strike are all too singular. Same goes for Wichita, who, after ten years, is still dealing with the same issues of attachment and commitment she had in the previous film. It is, however, extremely entertaining to see the effect the previous ten years have had on Little Rock (Abigail Breslin), who has since become a fully grown adult since the first Zombieland. And watching Tallahassee’s (gruff, domineering, but loving) fatherly instincts kick in for her is home to one of the film’s strongest plot threads.

And in the end, that goes back to the film’s two core strengths: the witty interactions between the characters, and the action sequences. Whatever else I may say about Double Tap, I can never say that there was a moment where I felt truly bored. While ten years is far too long a wait to justify the product we finally received, Zombieland: Double Tap’s running time of 90 minutes is the right length to justify the story itself.