The development of each new console generation brings us yet another jump in emulation and the PlayStation 4 is no different.  With the Switch now boasting the GameCube library digitally, it is only fitting for the PlayStation 4 to promote arguably the most successful console ever – the PlayStation 2.

Most fans are familiar with the highlights of the console, including Final Fantasy X and the Grand Theft Auto Trilogy, however as of late a lot of amazing and overlooked games have been added to the PlayStation Network. With over 3,000 releases it’s easy to have missed a good portion of the PlayStation 2 library. This week we’ve decided to celebrate some of these lesser known gems that you might not have played upon release. The large library that’s available on the PSN is only growing, so now is definitely a great time to check out some PlayStation 2 classic before we get deep into summer releases. 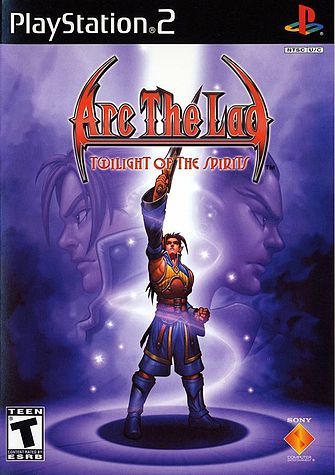 This tactical RPG hit the PlayStation 2 with minimal fanfare, however I expect this opinion to change with the current market favoring similar games such as Fire Emblem. At over 60 hours long, the epic story centers on two brothers separated at birth in a fantasy world where two species, Humans and Deimos, struggle for control over ancient relics called Spirit Stones. The story is told through well written dialogue and animated cuts scenes that exceeded graphical expectations at the time of release. 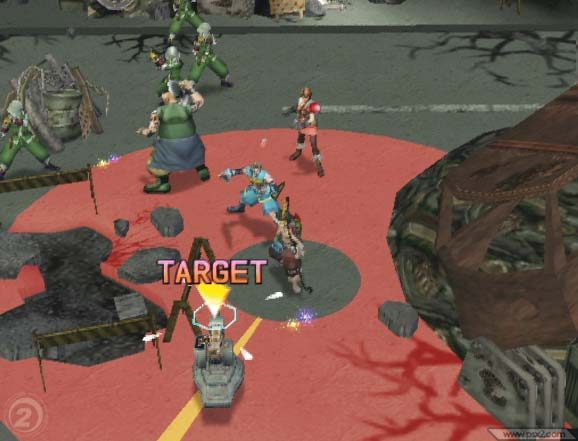 Each of the 14 playable characters features their own unique abilities and special combination attacks à la Chronotrigger. My main complaint about Arc the Lad is the odd instrumentation (bag pipes, horns, electric guitars) that are sprinkled throughout the score. A normally mellow and fitting score quickly becomes off-putting as it does not match the environments and disrupts the feel of the scene. Overall I encourage RPG fans to check out this underrated gem. 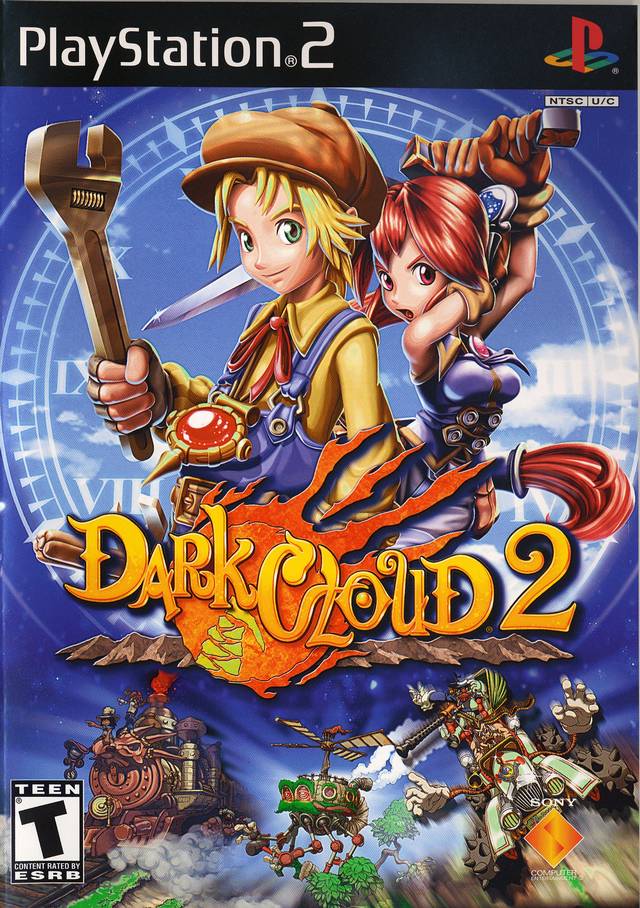 This highly regarded sequel will definitely quench your thirst for a modern RPG with an old-school feel. The combat system is played in near real time which creates a great hack and slash feel, really adding to the fast-paced dungeon crawling. Speaking of dungeons, they are randomly generated! I enjoy this aspect of RPGS as it helps not only with replayability but also to break the monotony that is often present in the genre. 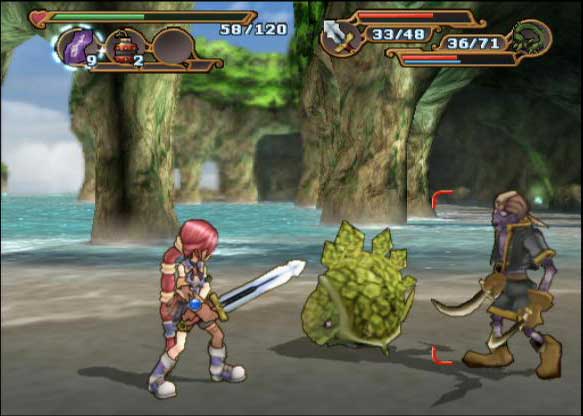 Highlights of Dark Cloud 2 also include a deep weapon customization system, mini-games, and a great character design feel that extends to side quests and armor. One selling point that I personally did not enjoy was the town building aspect, something that was highly praised upon its release. Goals that involve farming and building have never been my favorite, however, I do understand they add depth to the franchise. This is a must play for RPG fans that are looking to dip their toes into the JRPG genre.

Recommended for fans of: Final Fantasy X, Chronotrigger, The Legend of Mana 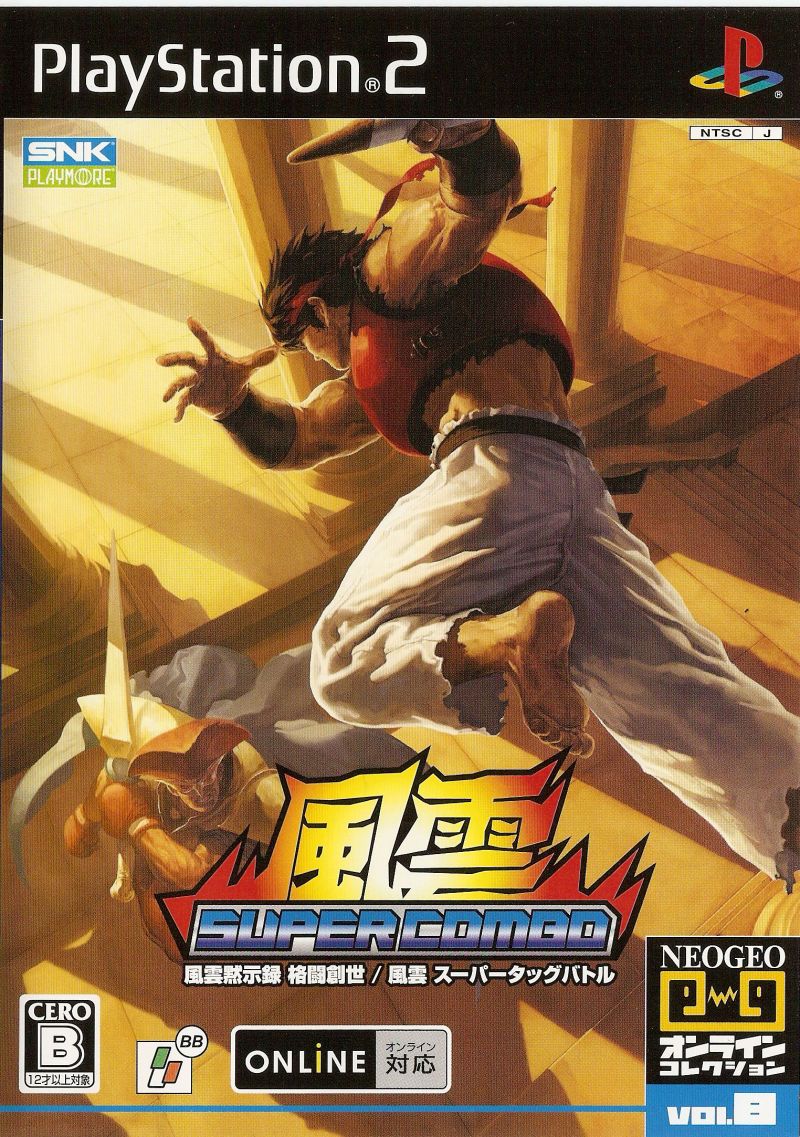 The NEO GEO as a console was home to some amazing titles but unfortunately, the price and availability of the console doomed it to a short life span. Thankfully in the years since its demise, SNK has taken the Sega route of porting many of their greatest hits to modern consoles. The Fu’Un Super Combo is a prime example of this as SNK and Sony ring us a collection of NEO GEO fighters that are outside of the famed Samurai Showdown and Fatal Fury series. This fighting game combo includes to NEO GEO gems: Savage Reign and Kizuna Encounter. 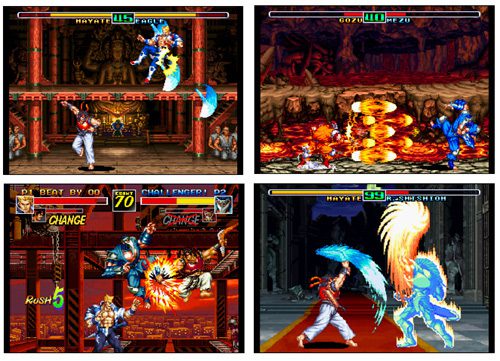 Out of the two games, I prefer the weapons fighter Savage Reign. The ability to switch the between two fighting planes adds a fun wrinkle to the one-on-one fighting genre and I’ve always been a fan of swinging big swords in games like Weapon Lord. The companion game, Kizuna Encounter, is extremely similar but exchanges the multiple fighting planes with a tag-team mechanic that allows players to switch fighters during battle. 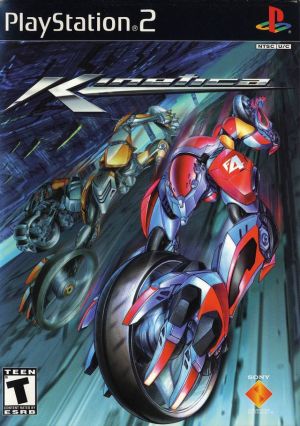 This futuristic racing game is definitely a fun party game addition to your library. The fast-paced and frantic gameplay finds the player wearing an exoskeleton that resembles a cross between Iron Man and the Transformers. Intense speed, gravity-defying tricks, power-ups? This game has them all. 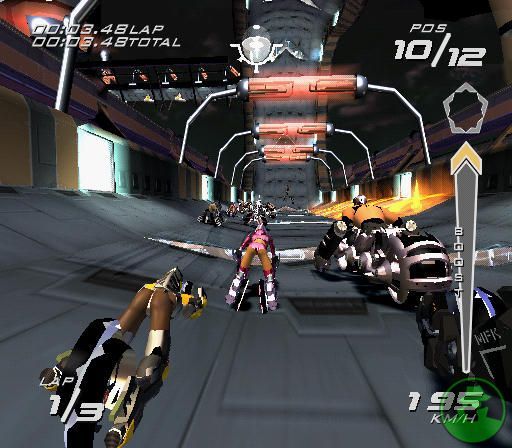 There 11 unique tracks with 6 different types of environments, all differing enough to keep the gameplay interesting. Controls are very tight and cornering with the exoskeleton could not be easier. Highlights of this title are the physics engine and graphics, both of which were well ahead of their time. If you’re a fan of fast paced racers, definitely check this game out.

SNK makes the list again with the famed Metal Slug series. This translation of the arcade classics includes 7 of the Metal Slug games, all featuring their own brand of frenzied run and gun shooting. This side-scrolling action game, like most SNK and NEO GEO games, has an amazing design with top notch graphics and extremely tight controls. 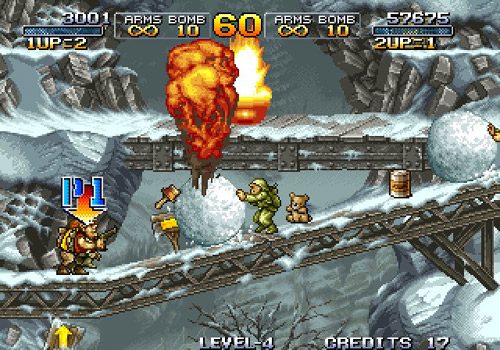 Tough but fair, the Metal Slug Anthology does offer unlimited continues for those interested in seeing the whole game without the stress of the waves of enemy bullets.  The variety of inventive bosses makes each level feel larger, something not often done with side scrolling games. It’s important to note that this series started in 1996 and holds up extremely well today. If you’re a fan of the series, this game is a must buy. 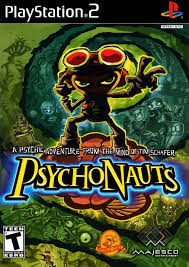 This surreal action adventure game finds the main character, Raz, as he foils a plot to steal the brains of psychic children. As the game progresses Raz earns new moves and attacks, eventually leading to a psychic arsenal including telekinesis, pyrokinesis, and more. 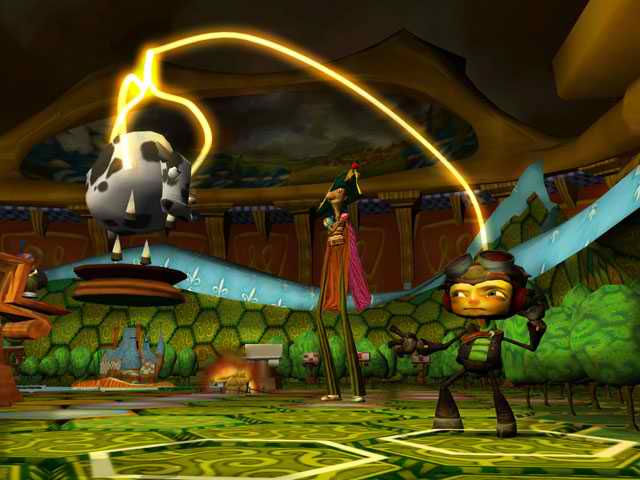 The story is loaded to the brim with hilarious one liners and humor, giving the game an extremely fun and lighthearted feel. This wild game is a great take on traditional platforming with a distinctive setting; Psychonauts is definitely worth a play for gamers that like to laugh. 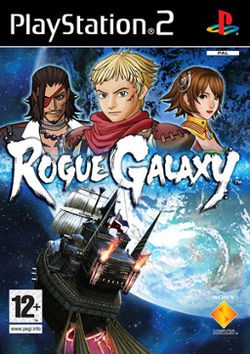 This spiritual successor to the Dark Cloud series is one of the better ports to the PS4. While it doesn’t add anything new to the game, it does take away the excruciating load times of the PS2. For many RPGs of the era, most notably Chrono Cross, the load times going in and out of battles downright killed the momentum and scope of the game. As space pirate Jaster, it is up to the player to take their guns and swords out into an impressive world and save the day. 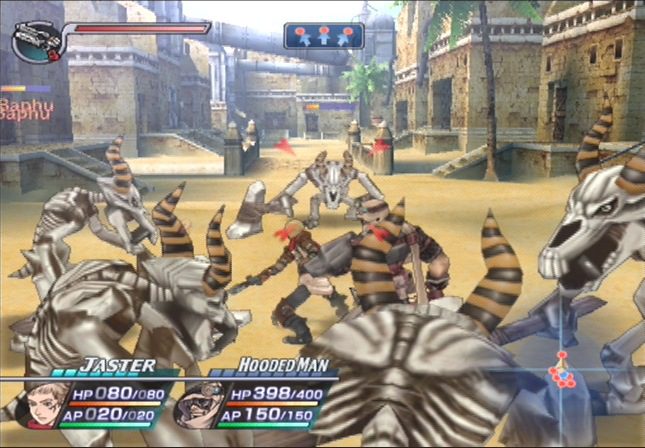 Standard role-playing systems are in place (weapon customization, mini-games, NPCs) however the fun and adventurous atmosphere combined with good design allows Rogue Galaxy to distance itself from counterparts of the time. With the ever increasing popularity of Star Wars, now is a great time to revisit a game that tries to riff on the “galactic rebels saving the day” story. 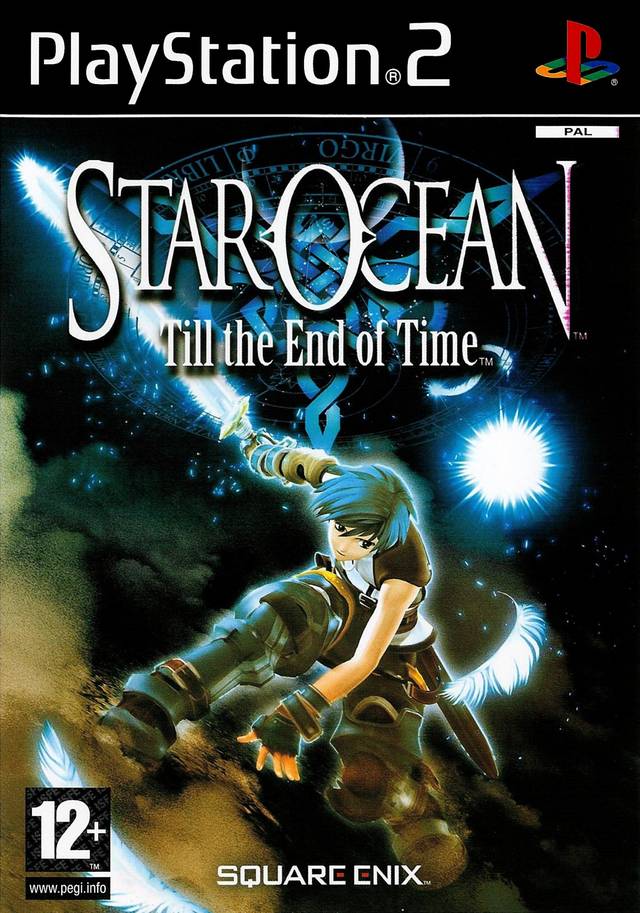 The third title in the series, Star Ocean: Till The End of Time is another fine RPG from developer Tri-Ace and Square Enix. The story follows Fayt and Sophia as they fight to reconnect with their families after a devastating alien attack. Much like other fantasy games the story goes well beyond its roots with twists and turns that will shock players. 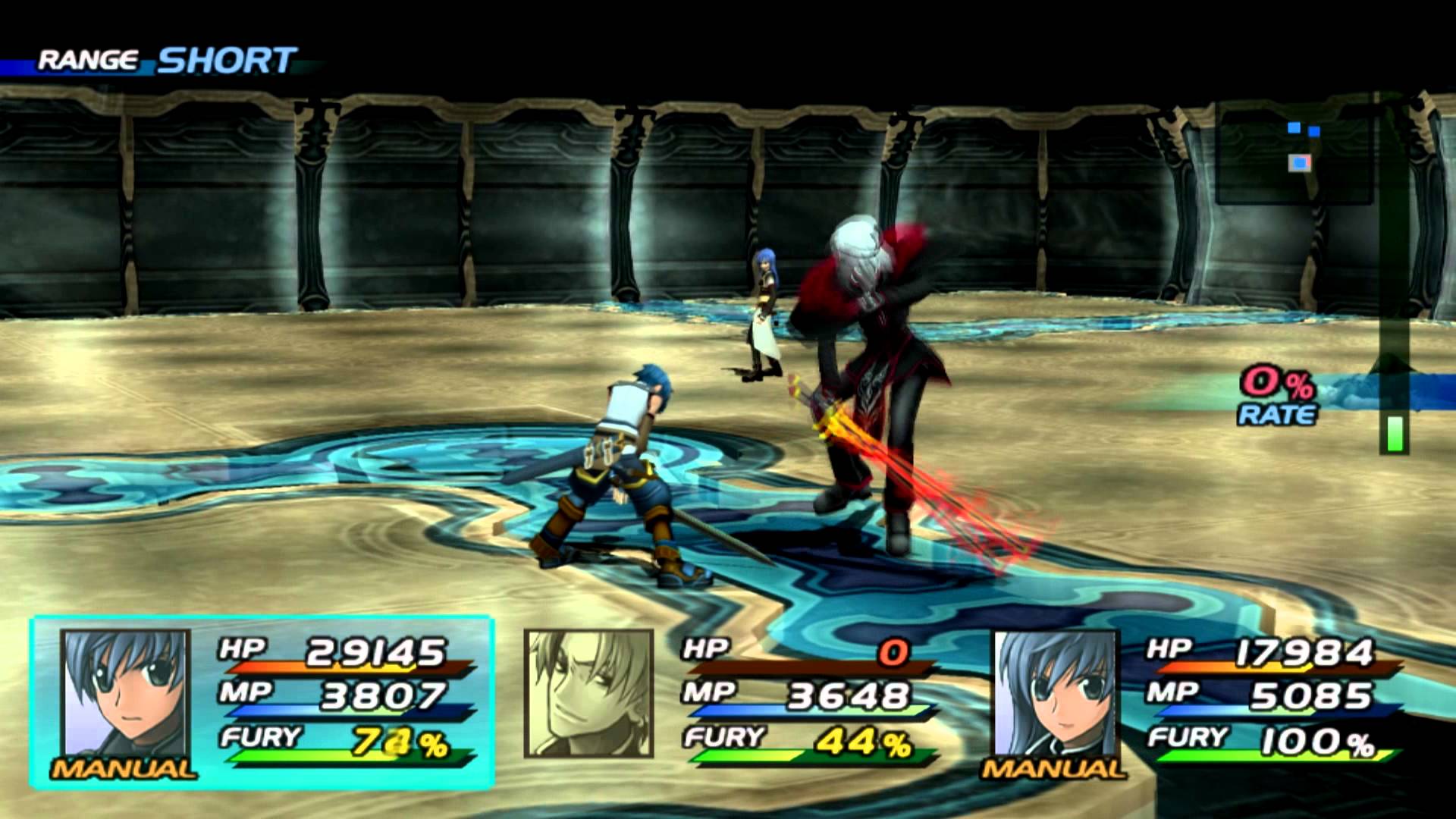 As with most PS2 games of the time, the story is primarily told through cutscenes that, while not mind-blowing today, were a great addition in the years that followed the release of Final Fantasy VII. The battle system is meant to be fast paced with a strategy element that helps with the repetitiveness that can be so apparent in other JRPGs. At approximately 75 hours, this deep role-playing experience will assuredly give you your money’s worth.

Recommended for fans of: Xenogears, Tales of Vesperia, Legend of Dragoon 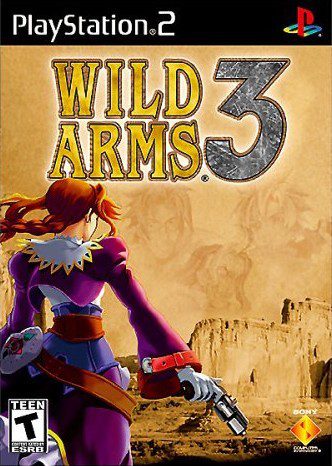 Wild Arms 3 is a great example of an opportunity for retro enthusiasts to play a rare and expensive PS2 game that they otherwise might not find in the wild. This fantasy-western RPG is a great mix of character and puzzle design that was somewhat forgotten in the post-FFVII RPG landscape. For Wild Arms 3, the developers decided to experiment with a full 3D environment including free-roaming 3D battle areas. Special moves and magic are here and terrain also plays a factor in attacks, adding a nice layer of strategy to the action. 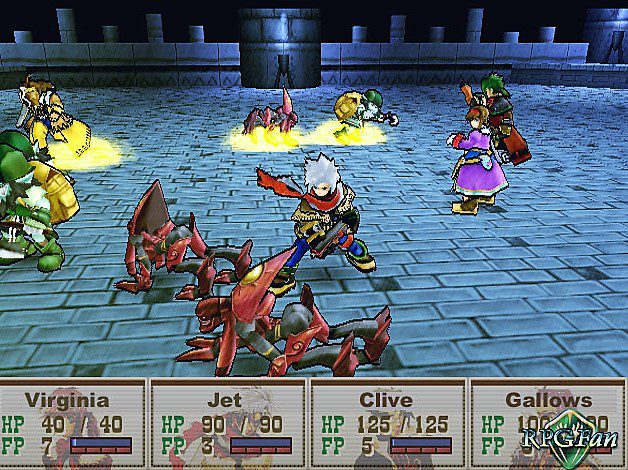 As with previous entries in the series, dungeons are similar to Zelda in their lengthy puzzles. While it doesn’t necessarily avoid all of the tropes of the average role-playing experience, Wild Arms 3 is a nice change of pace bringing the western genre to what is normally a fantasy outer space format.

Recommended for fans of: Tales of Vesperia, Grandia, Xenoblade 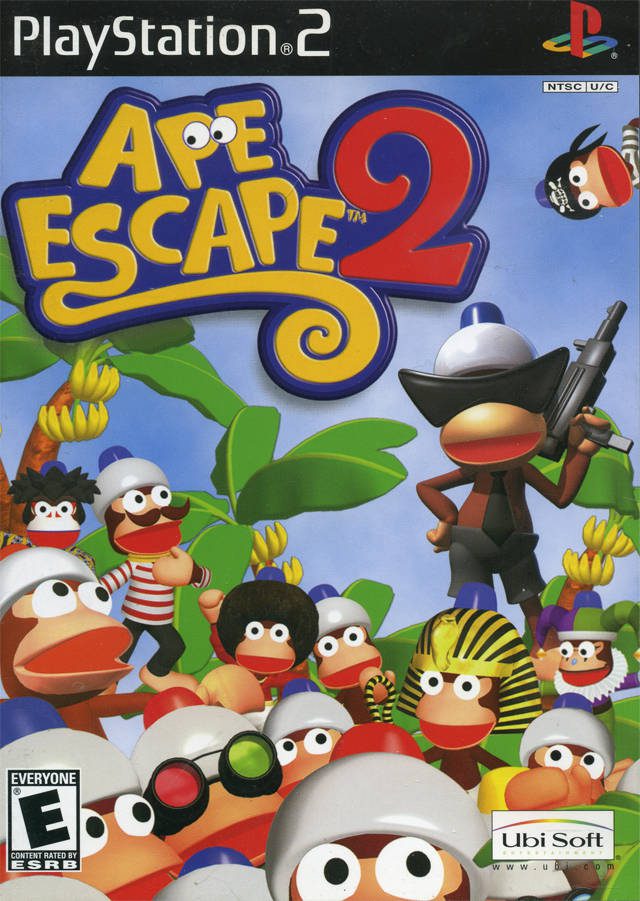 Known as Pipo Saru in its native Japan, Ape Escape 2 is a wacky adventure collection that is a callback to the Nintendo 64 era. The tight controls are easy to learn for even a beginner which allows more focus to be put on gameplay as opposed to dealing with the poor camera movement and floaty design of early PS2 titles. The object of the game is to catch 300 Apes that have escaped (thus the title). They’re not all the same though, with specialized enemies and bosses that add a nice level to the gameplay. 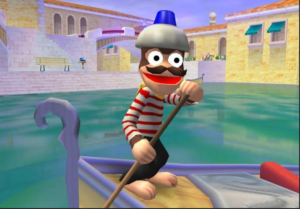 Deserts, forests, ice caverns, and even ancient Greece are all featured in the whimsical environments and while not all levels hit the mark their graphical presentations are top notch. The humor and style of this platformer make it the perfect title for a casual play or even for family gaming.

What are your favorite PS2 games? What games would you like to see ported to the PS4? Comment below and stay tuned to GWW for more video game fun.