One of the many things I’ve always enjoyed and appreciated about 12 MONKEYS is its consistency. When it comes to the writing, the storytelling, the acting and all the twists and turns we witness (no pun intended), 12 MONKEYS never fail to maintain its consistency. Not only that but every episode following continues to build the foundation of its story. Season four, the final season, just premiered and hit us with three emotional gut punches, in THE END, OROBOROUGH, AND 45 MPG. Let’s break this down as best as we can, shall we? 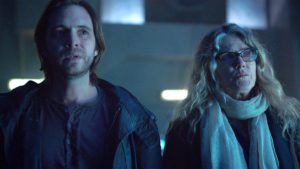 The stakes continue to grow as we picked up where season three left off. Katarina wounded at the hands of Olivia. Cassie, Cole, and company doing everything thing they can do to outlast the attack from TITAN and Jennifer back in 2018 on a separate mission, doing Jennifer things. It would seem like that alone would be enough for just one season. But, here we are and it’s only the season premiere. THE END is handled extremely well with so much action going on. But, just as in previous seasons it’s the emotional moments that really steal the show. During a critical moment when Katarina must get to the core of the time machine, she runs into Whitley, who had just been badly injured and left for dead. Katarina knows this is their last moment together. As the facility begins to collapse around them Katarina sits next to Whitley, places her hand on his and accepts whatever fate is about to take place. A beautiful and tragic moment.

However, death is not meant to be, for Katarina, for now at least. With her successfully getting to the core she was able to get the machine to splinter the entire facility into a safer area. However, Cole discovers that not only did they splinter to a much safer place, they also traveled back in time. Back before their mission expanded, back before they knew about The Witness. They had splintered back to the day Cole was first meeting Cassandra. They had splintered back to the beginning of the end.

While deaths were the cost of allowing the machine to splinter there were also other losses as well. Just as 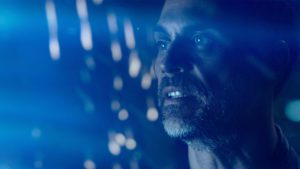 the entire facility was about to splinter the team lost Deacon. Not to death, but because he didn’t make it back in time. And the look on the SCAV KINGS face is one of disappointment and heartbreak. But, as we learn in 45 MPG, death isn’t in the cards for Deacon. He survives the facilities destruction and is questioned by Olivia about the whereabouts of his former friends. But, he isn’t so quick to give them up. Not because he’s protecting them. Because Deacon has revenge on his mind and if anyone is going to stop Cassie and Cole it’s going to be him.

Have you seen this:
Serious Sam 4 (Review)

Last, but not least we have Jennifer. Who provides one of the funniest moments in the entire series. She’s back in 2018 working to discover an item that will help Cole and Cassie defeat Olivia. But, it’s the way she goes about it that’s quite entertaining. While it appears initially that she transformed into a ninja with some serious butt kicking skills its revealed that it’s just one of the voices in her head. Nonetheless, Jennifer is successful in her goal. If only she knew how to use it.

OROBOROUGH is such a fantastic episode. It does so many things well while also allowing characters to 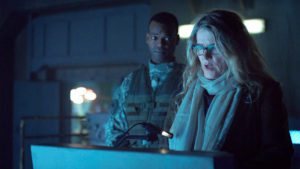 confront the guilt they carry and say goodbye to their past. One of the best moments is when Katarina sees Whitley. She tells him how much she appreciates him knowing this is the last time she’ll see him. Knowing his unfortunate fate. It’s an opportunity of closure for her to a person who was with her till literally his very end.

But, watching Cole, who still carries the guilt of killing his best friend/brother, try and talk to Ramse was as gut-wrenching as it gets. Especially, as he speaks about feeling guilty and not being able to forgive himself. Ramse’s calming words of “stop trying” spoke volumes to Cole. Because he continues to carry the guilt with him he doesn’t get closure the way Katarina did. What he did get was one final moment with his best friend and in his own way, he was able to say goodbye.

Back in 2018 we find Jennifer on the run and holding a very valuable weapon, that she still doesn’t know how to use. 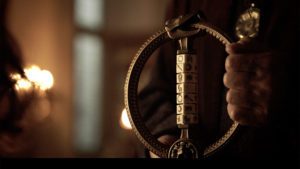 However, it appears she is running from the wrong people. Amid trying to escape she leaves the valuable artifact behind and this new group, led by a named man Bonham (played by guest star Conleth Hill) seize their moment and take it with them. But, Jennifer with the help of “future asshole Cole”, contacts Bonham in hopes of getting their weapon back. And it appears to happen easier than they thought it would. Mainly, because Bonham is not after them to kill them. He reveals that he knows Cole because of a story passed down from his ancestors and how past generations of his family were sworn to protect the tool that can help save them. It appears that Cole is the man who can save the world and he now has the device that can this horrible loop.

Have you seen this:
Batman Fear State Alpha #1 (Review) 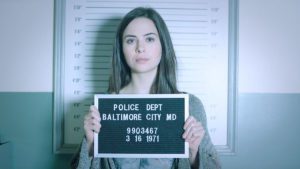 Another big part of episode three, titled 45 RPM, is focused on a young Olivia and how Cassie is on a mission to find and kill her. Before she becomes the witness before she sends everyone on this hellish endless loop of death and destruction. This was a layer that we hadn’t yet learned about with Olivia and certainly not in a way we’ve ever seen her before. She’s young, wondering about trying to find a place just to hide out and steering clear from the 12 Monkeys army that is beginning to form. But, something happens to young Olivia. She becomes controlled by the future version of herself and instigates Cassie so much that there is no question that they are now on a collision course to face each other.

The one big piece of information we did learn about is that Olivia was pregnant with a child. While she did have the baby she did abandon it. But, someone else came along and took the baby in. Now, as we continue to wind down, we can’t help but wonder, who was that baby and who took the baby in. So many questions, so little time left.

This first three episode continued to maintain the consistency that has carried through the previous three seasons. The emotion, the story, the acting, the action. I could keep going. But, I’d rather not lose your attention. So, I’ll just end with this, Season 4 has been nothing short of spectacular. They’ve already hit us with quite a few twists and turns as this final season winds down I can’t wait to see what they have in store for us.