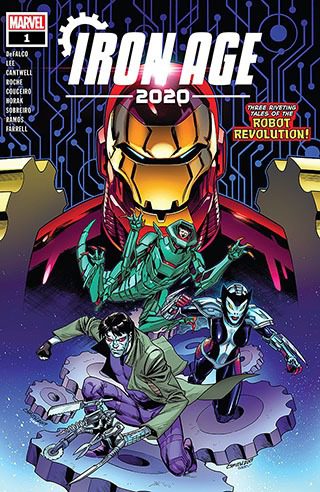 We’ve gotten to the halfway point in the Iron Age 2020 list and it appears that besides a new Machine Man we have an anthology of stories. This anthology, called ​​2020 Iron Age, brings us three stories from within the entirity of the AI Revolution. This anthology gives us an additional depth to the whole storyline.

Machine Man takes the lead in the first story “Roads Taken!” in which he tracks down some loose threads of AI dissent. In “Robot of Conviction” we see Alkhema bringing about free will to a facility full of AI but will they take that offer. In the final story, “Curiosity”, we see Doctor Shapiro without a collar and without a mission but the title says it all.

The entire anthology is good however there really isn’t much to it that would make me want to give it a second read. “Curiosity” was a story similar to the X-Men comic I reported on recently with minimal dialog and it worked for both stories. “Roads Taken!” seemed like it missed the mark when it came to its story and lost me a little bit. The middle story, “Robots of Conviction”, did have a decent story though it felt very holier than thou and I feel it meant to hit that. I felt as if it was good but missed something. The artwork in all stories were of great quality and did bring light to the narratives. Overall, a good combo comic but could have brought more to the arc.