In the early nineties the ultimate addition to any party was the NES Four Score; a multitap connector that allowed four gamers to play simultaneous on the NES. This isn’t a mind blowing thing now but prior to the release of the Nintendo 64 it was almost unheard of to have arcade style play at home. Although there weren’t too many releases that took advantage of the Four Score, there were plenty that toyed with the mechanics of four player action. Unsurprisingly, many of the titles were sports related however a few under the radar releases really pushed the boundaries of simultaneous play. So what games are worth checking out? Let’s explore some titles that are great party plays.

There’s not much to say about this top-down racer that you don’t already know. Super Off-Road’s loose controls and learning curve only add to the fast paced multiplayer action. There are eight different tracks and 99 races altogether. One interesting addition to the game was the ability to upgrade your vehicle using the money won from races, something that would become a regular feature in most racing games moving forward. As far as four-player racers go, this and RC Pro Am are the two to beat.

Caveman Games, known as Caveman Ugh-Lympics outside of the US, was a 1988 sports title for the NES. Similar in play style to California Games, players compete for medals across a series of events. Unlike California Games… these events are ridiculous and awesome! The game includes such events as saber race, fire making, clubbing, dino race, dino vault, and mate toss (an event that could never be included in modern games). The four-player action can get quite competitive despite the slow game play style. Word to the wise: check out the instructions first, there are no tutorials and some of the controls are very difficult to figure out.

The Bomberman franchise continues to live on in multiplayer infamy. Entries in the series often are the cornerstone of multiplayer games on Nintendo consoles, ranging from the Nintendo 64 to the new Switch. Bomberman was no different with the NES when Bomberman II sent gamers into a competitive frenzy. This was the first entry to feature a versus and battle mode yet the player count was limited to three players instead of the usual four. The gameplay remains somewhat untouched from the first game, utilizing the classic top-down view for run-and-bomb fun.

Quick aside: when you party, stay safe. And consider staying cleansed prior to a drug test. For more information go to this page.

One of the classic sports games for the console, Super Spike V’ball brings the arcade smash (no pun intended) to the home console. One of the few sports titles to feature a functional four-player mode, the game has great sprite work and even includes Billy and Jimmy from the Double Dragon series. Known as U.S. Championship V’Ball outside of the U.S., the game centers around two-on-two beach volleyball that spans the globe. Hard-hitting and fast-paced, this is a must own for summer NES party games.

I know I know… A licensed game. While A Nightmare on Elm Street may not light the world on fire it is actually an incredible example of adapting gameplay to a four-player model. Each player takes the role of a teenager as they collect the bones of Freddy Krueger in order to burn them in their high school’s furnace. Throughout each side-scrolling level the players battle a variety of enemies from bats to Minotaur. Once the bones are collected in each area, a boss battle with Freddy ensues. By far the most interesting aspect of this game is the Sleep Meter. This meter shows how close the player is to falling asleep, thus being susceptible to Freddy’s attacks. By gathering cups of coffee the player can keep refilling the meter to stay out of Freddy’s nightmare dream world. I recommend A Nightmare on Elm Street if you’re looking for some non-competitive four-player action.

I am mainly mentioning the hit arcade port because of its unique control set up regarding the four-player adapter. In Smash TV, using four individual players is not an option however four controllers can still be used to play in an attempt to emulate the feel of an arcade control set-up. Basically you lay the controllers out flat and use one for movement and the other for shooting much like the joy-stick button combination found in arcade cabinets. If you haven’t played Smash TV before, you’re in for a treat.

What are your favorite NES party games? Do you prefer two or four player co-op? Comment below and stay tuned to GWW for more video game features. 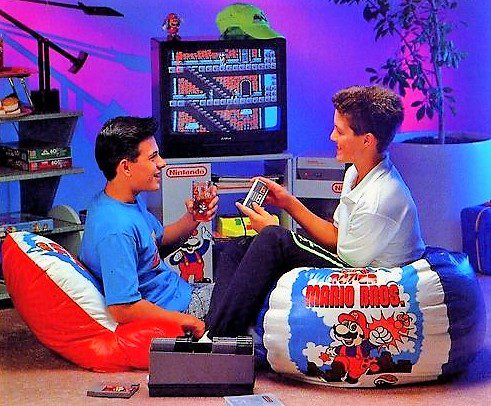 Have you seen this:
Games that Save Space - Gww staff picks