A Journey Begins: Odyssey of the Amazons #1 Review 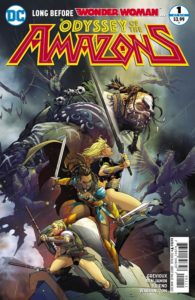 Odyssey of the Amazons #1
DC Comics

Kevin Grevioux’s Odyssey of the Amazons is a successful start for this Homeric miniseries. The mythology around Wonder Woman was shaken with some of the discoveries after DC’s Rebirth launch and there remain a number of questions surrounding the Amazon home of Themyscira. Fans of adventure and mythology tales who are looking for something new to read will find a lot to enjoy.

Grevioux has written a diverse mix of comics over the years writing for both major publishers to creating his on comic line. Grevioux’s screenplays include the Underworld series and I, Frankenstein. He has found success in fleshing out some traditional mythologies and putting those mythologies in a new context. That writing history makes Grevioux an excellent choice to tell a story from Amazonian history that looks to weave across a variety of mythologies. In this first issue, the Amazon leaders were on a quest across the planet to find other women who share the Amazonian power. The narrative starts mid battle in Egypt as the Amazons from around the globe fight along side a newly discovered Amazon. The warfare setup quickly gives way to a political and religious conflicts in the group as they argue about the extent and purpose of their quest.

This setup creates a diverse team of adventurers  from different cultures and perspectives. Some are deep believers in the Amazonian ways, while others are just coming to grips with their power. Grevioux’s mix of characters creates conflicts within the group and provides avenues for further exploration around the mythology as the series continues. Grevioux wisely doesn’t linger too long with this world building though. While these are characters that readers do not know and it is necessary to establish some connections for the reader, Grevioux moves these powerful women warriors quickly to a new threat. This threat takes the characters into the heart of Norse mythology. 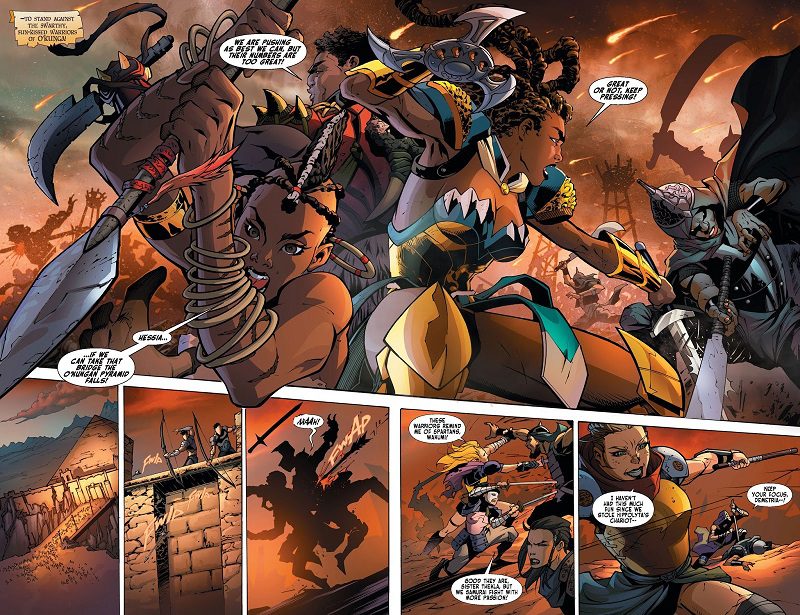 A challenge for any new comic without existing characters is to create a narrative that creates distinguishable characters that a reader can invest in. Grevioux uses a lot of characters here, and many of them do not make it to the end of the first book. The who’s who in this issue is initially hard to keep up with, but the small main cast of characters is focused by the end of the issue. This whittling of heroes provides the epic scale and personal emphasis that matches the Homeric scale of the Odyssey in the title.

The juxtaposition of multiple mythologies provide Grevioux with a world of adventure to explore that looks to earn the Odyssey in the title. This first issue is successful in investing the reader in these characters. While there is not a strong tie to any of DC’s existing story lines, this stand alone adventure may prove to be a journey worth taking.