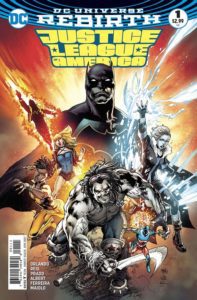 So what does the Dark Knight do when he realizes that he can’t be everywhere at once? He decides to make sure that his presence is. Batman has decided to recruit his own team outside of the Justice League. A team that can stay close to the ground and tackle threats that the League cannot. At least that’s what he’s trying to convince a reluctant Vixen is his goal as the two of them go out on patrol. Meanwhile, two additional members of the would be JLA are trying to rescue people from a homeless shelter. The Ray and Black Canary manage to get the job done and she makes The Ray an offer in the aftermath. 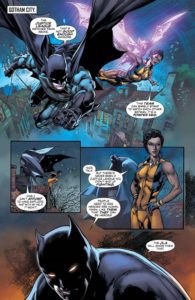 Lobo has decided to find something to care about and actually fight for: dolphins. At the team’s new base on Happy Harbor, Atom and Killer Frost are trying to get the systems working that will connect the team members out in the field. A move that impresses Atom who has forgotten that Caitlin Snow is a scientist. Her desire for redemption is an interesting story arc that I hope they don’t abandon too quickly or dismiss altogether. As they continue to work on the communicator, Lord Havok and his Captains traveled across the universe to conquer Earth in order to save it from its own destruction. He and his Extremists go on the attack against the new League and Batman may have to make the ultimate sacrifice in order to save this nascent team of would be heroes.

This is a pretty good paint by numbers kind of first issue. It certainly shows the dynamics of the team through the interactions with its members and I enjoy Vixen and Black Canary taking center stage as independent potential leaders of this team who have their justified misgivings about it. Steve Orlando does a really good job of not forcing any of the moments in the issue and allowing the events to unfold naturally. Ivan Reis’ art is well detailed and some of his compositions are very well done. He does have a certain view of Batman in that he seems to go out of his way to make him seem menacing even when speaking to an ally. The Ray and the new Atom are not exactly large on personality, so there is a danger that they can get lost in the shuffle of these strong wills, but that is something that I would like to see play out in future issues.