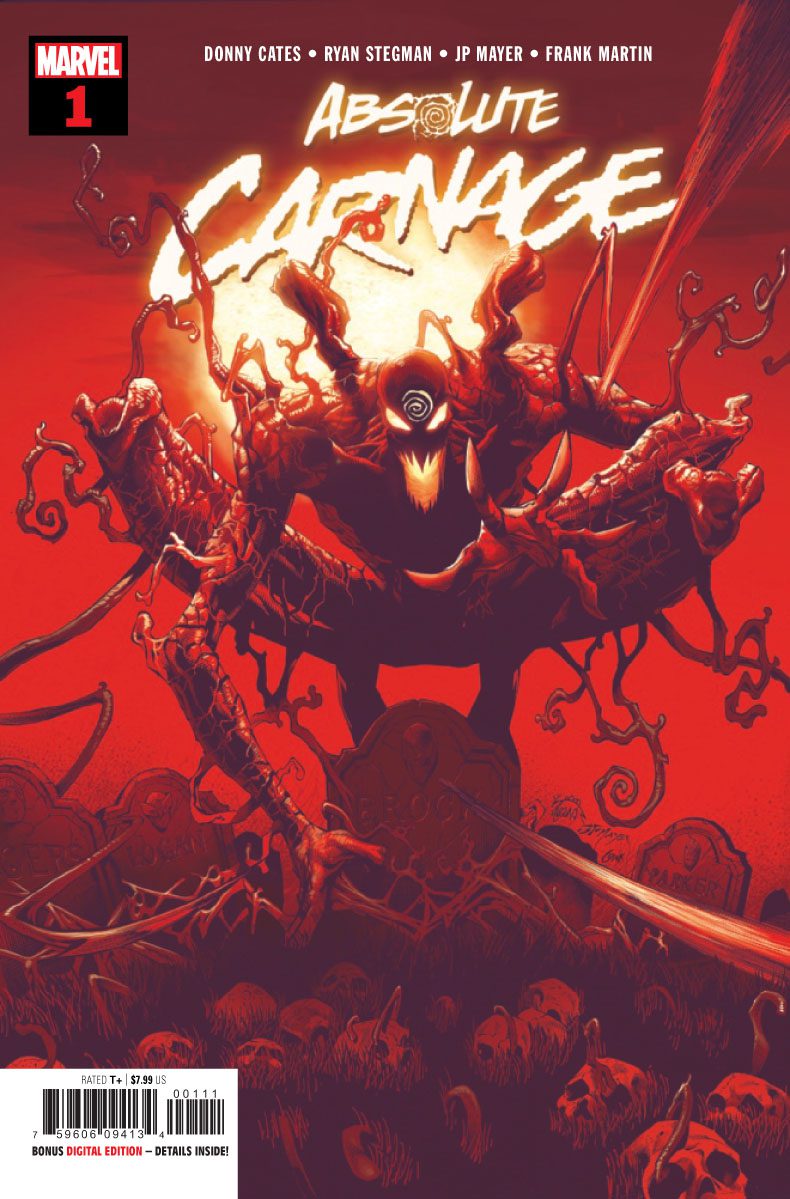 The big Marvel event of the summer starts here and it starts with a bang. I’m old enough to remember the Maximum Carnage storyline of the 90’s, which was a great Spider-Man crossover, (but a better video game) that first laid the groundwork for the introduction of Carnage, and his symbiotic ties to Venom.

Here we are, all these years later, and Donny Cates is starting to tell the tale that will far surpass its predecessor. Absolute Carnage sets the stage quickly by establishing the history of the alien symbiote that has plagued the Spider-Universe for decades. Cates quickly delves into the personal history of Eddie Brock, better known by his alias, Venom. Within just a few pages we learn that the symbiote was a creation of a dark God that existed before creation itself, the symbiotes were his personal army against the emergence of life as we know it. The symbiotes turned against their creator and now hold him prisoner.

Meanwhile a few millennia later, the mass serial killer Cletus Kasady has been resurrected by a death cult loyal to the dark God. Kasady has made it his mission to collect “The Codex” or the genetic pieces of DNA that have bonded with every previous host the symbiote has encountered. The Venom symbiote has bonded with a number of Marvel’s biggest characters and now all of them are at risk as Carnage is killing off previous hosts in rapid fashion.

The pacing of this issue is impressive. Cates sets up the plot-line so quickly that before you know it you have become invested in the outcome. Not only is there the over-all storyline of Carnage going on a rampage and killing anyone who gets in his way, but there are sub-plots being formed that are just as entertaining; Venom is back with Eddie Brock, Eddie has a son who doesn’t know Eddie is his father, Spider-Man is thrown into the middle of this madness, and let’s not forget that this series is a nod to Maximum Carnage; so there are cameos aplenty in this. The Maker, Red Goblin, and John Jameson (Werewolf by night) all make appearances.

While Cates is deftly handling the story Stegman takes centerstage and uses this series as a chance to cement himself in the pantheon of amazing Spider-Man artists. I’ve been a fan of Stegman for years now, but this is his best work to date. The depiction of the modern incarnation of Carnage as a twisted half corpse with his spine and rib cage exposed, save for the red symbiote is a horror movie classic waiting to come to life. It’s haunting and terrifying in a way that helps up the stakes as Eddie and his son run for their lives from this insane monster.

There is a panel early on in the issue where Eddie and his son escape a pursuer by running into the subway, only to have Carnage reveal himself in the background as Eddie tells his boy that they are safe. That image alone is nightmare fuel. It perfectly encapsulates the horror and danger that the pair are going to be facing in this series.

What the creative team is accomplishing here is establishing Carnage on a Joker-esque level of Villain. He nuts, he’s a serial killer, and he can’t be reasoned with. Carnage has become an unstoppable force in the Marvel Universe and it can’t be more apparent than a scene towards the end of the issue, where Kasady uses little symbiote spawns to infect nearby prisoners and turns them into his own Carnage army. Carnage does this with no rhyme or reason, just a simple mindless push towards his objective of collecting the codex from all previous wearers of the Venom symbiote. By the way, the whole objective for Carnage is to collect the codex from all past hosts so he can use that genetic information to contact the symbiote homeworld and awaken the dark God.

Stegman’s art is perfectly embellished by the master colorist Frank Martin. Frank has even used a lightening trick in the story that filmmakers use. Scenes with Venom are tinted more in blue, scenes with Carnage are tinted in red, scenes, where Spider-Man appears, have a yellow tint and Martin even goes further by mixing the palate based on the characters on the page; When Spider-Man and Venom are interacting, the scenes are tinted in green. (Yellow and Blue make Green) But when Carnage appears, the scenes are toned in red, regardless of who is on the page. It’s a nice visual trick that helps keep the tone of the story moving forward.

It’s not hard to see that this summer event is going to be a winner for Marvel. This is a hell of a lot easier to follow than the recent War of the Realms mess. You don’t need a scorecard to keep track of the cast, and at the heart of the story is Eddie Brock who just wants to be left alone. He doesn’t want to be a hero or a father, and it will be those moments of growth throughout the mini-series that will make this character interesting and fresh in a way that Venom hasn’t been in a very long time. It’s a chance to add more to Venom than just the anti-hero with the fangs and the long tongue.

It’s safe to say that this summer belongs to the symbiote.