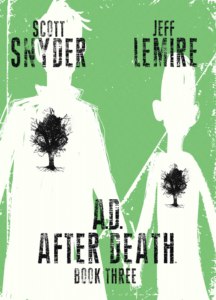 When I first started this series I was taken aback by how different it looked. I was impressed with the storytelling, the style of the narrative, the artwork and how unique the overall look of the series was. As I continued to read and become more engrossed and engaged in the story there were moments when I wondered how they could conclude this story in a way that didn’t disappoint. Fortunately for me, they delivered and with a gut punch of an ending for me that left me asking for more.

When we last left Jonah, he was following the signal from the mysterious Forager after escaping the confined safety of the mountain. He seems to be getting closer to the signal and closer to the answers that he is seeking. As he finally takes a moment to relax, a beeping is heard from the large pack he is wearing on his back. It turns out that there is someone in the pack, Claire. We learn a lot about Claire and her story as Jonah does everything he can think of to save her life. We also get additional information about the history of the cure for death and its significance in the story. 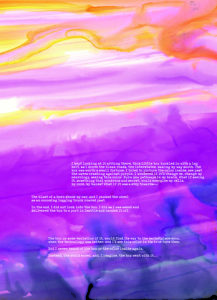 As he brings Claire back from the brink of death, he is attacked by a creature. This is another moment in the story where Jonah gets to be braver than he thought he was as he defends Claire from the creature. As he prevails in saving both of their lives, Jonah is filled with the confidence to continue on his journey. As he continues on his journey, we are given an insight into how the cure works and what the flip side of eternal life actually is. As Jonah recounts finding the journals that started him on his adventure, he is confronted with a new hope as a message from Forager directs him to the shore. As Jonah makes his way there, he is confronted by Errant, time, Jonah’s own choices and a truth the hits you squarely in the gut when you read it.

This series seemed intensely personal as I read it. The characters were so well done and the story was so well executed that every moment that you are involved in Jonah’s story feels genuine. Snyder has crafted a really well-done character study in Jonah. There are moments throughout the narrative where you both dislike the man and his choices and at the same time root for him to succeed or discover something about himself that will allow him to make better decisions. Jeff Lemire’s artwork is haunting in several moments throughout the story. Sometimes it can be as simple as a single image on a prose filled page or a page of comic panels, but every image makes the reader think about its significance in the overall story.

This is a great conclusion to a great, personal story that I hope finds a new chapter to be written someday soon.