One thing I must start off saying about this issue is that, well, the illustrations are awesome! All four stories display such a variety of art styles, that stray from the traditional Adventure Time style we are accustomed to from the cartoon show. I highly recommend checking it out, if you’re interested in various art styles.

Written and Illustrated by: Anoosha Syed

BMO is tired of being a tiny, cute robot that nobody takes seriously. Instead, BMO wants to gain a buff, robot body so he can join Finn and Jake on their adventures – and FIGHT! But who would have the knowledge to assist our little robot’s plea? Why, Princess Bubblegum of course! She is happy to help BMO in his quest and soon builds him a robot suit called “BMAX,” a suit BMO gets adjusted to quite quickly as he decimates and entire room in under a second (at least I think that, I mean, it happened quickly, but the time isn’t shown… and it is a comic).

BMO quickly joins Finn and Jake on an adventure, and meet face to face with a giant, horned, red creature with a battle mace for a tail. Finn, Jake, nor BMAX could defeat him… but BMO knew what to do.

Defeat him with cuteness, naturally! 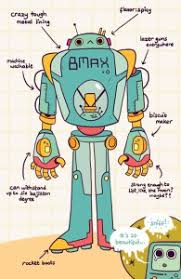 Written and Illustrated by: Marie Enger

Jake and Finn go all secret-like to an odd door in the Goblin Kingdom, to enter into the realm of the THUMB-DERDOME! Here you will see the unforgiving, grueling battle that is… thumb wrestling? Um, sure! Why not, right? When one Goblin remains, the reigning champion is called in one “forged not from dirt and mud, but from wires and metal.”

It’s BMO, AKA Aunty Phalanges. How is he the reigning champion? Er… he doesn’t have thumbs.

Written and Illustrated by: Jenna Ayoub

Ah, a nice one-pager. Nice and short. I like to see these in comics once in a while, as it’s a short break from the slightly longer ones (especially in a volume compilation). At first, it appears a giant crab creature is about to attack Princess Bubblegum, and of course Finn is there to try and stop it! However, the crab creature has other plans, as it catches Finn by the leg (the booty first, tee-hee), and Bubblegum cries out!

Have you seen this:
Future State: Gotham #1

Thankfully the scene transitions, and it turns out Finn, Jake, and PB are just having some fun while they’re at the beach.

Wait… faking danger and fighting monsters on a day off? Well, I guess that isn’t that unbelievable. It is Finn and Jake afterall. 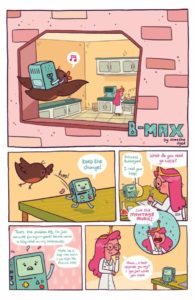 “Mightier Than the Fist”

Written and Illustrated by: Ben Passmore

After Jake’s body is stolen…

You read that right. I mean, it wasn’t stolen, per say, more than it was just stretched away from Jake where he couldn’t quite move it. In order to get back at this ninja warrior (who looks like a turtle) Finn and Jake address a warrior of ultimate power!

Jake, however, discovers this all mighty warrior is not as mighty as initially thought. The true power? It’s all in beefing up the bravado, and lying about your powers.