Adventures of the Super Sons #11 Review 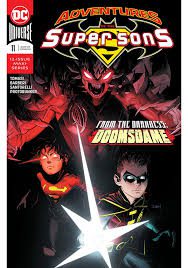 Adventures of the Super Sons #11

It is the penultimate moment for Rex’s plans to come together and with the Super Sons surrounded, it looks like he just might succeed.

Lucky for Jon and Damian, Space Cabbie returns and he brought some unusual help with him. In the ensuing battle, Superboy and Robin have to admire the amount of detail Rex put into making small versions of Earth villains. As they continue the fight, they know the only way they can get home is through the portal Rex has opened.

Seeing that the battle has turned in favor of the Super Sons, Rex decides to fly through the portal on his own. Jon and Damian must follow him if they have any chance of stopping him and getting home themselves.

Peter J Tomasi has brought the characters to the brink and seems to be setting up something interesting with the final issue of this series. While there are some moments that feel forced, the story itself continues to work when it centers on its two leads. Rex is menacing enough a character to keep the characters on their toes, but there is a lot that Tomasi has to wrap up in one issue.

Carlo Barberi’s art is great and the action is especially well done. There is a lot going on in the panels, but nothing is overwhelming to the senses. All the pages are filled with dynamic action and details.