Southern California-based progressive rock outfit AEGES are preparing to return to the road in the U.S. supporting their latest full-length effort, Weightless (2016). The band will be joining hard rock titans Chevelle as direct support on a May tour, as well as playing a handful of festivals including Rock On The Range, Rocklahoma, and 98 Rockfest. Before embarking on their upcoming U.S. tour, the band will also play a pair of shows with Hell Or Highwater on the West Coast. 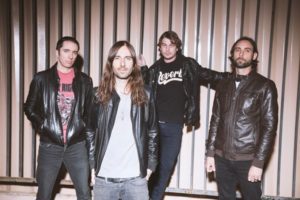 Speaking about the upcoming Chevelle tour, AEGES lead vocalist/guitarist Kemble Walters states, “We’re pumped to hit the road with Chevelle for a 2nd time. Their fans are true music fans and we can’t wait to play some new material for them. It’ll be great to see some old faces, make new fans & friends and then rock out with the crowd for Chevelle. See ya soon!”

Have you seen this:
Misha Green Takes over as Writer/Director on 'Tomb Raider' Film

* - Festival Date (no Chevelle at Rockfest or Rocklahoma)