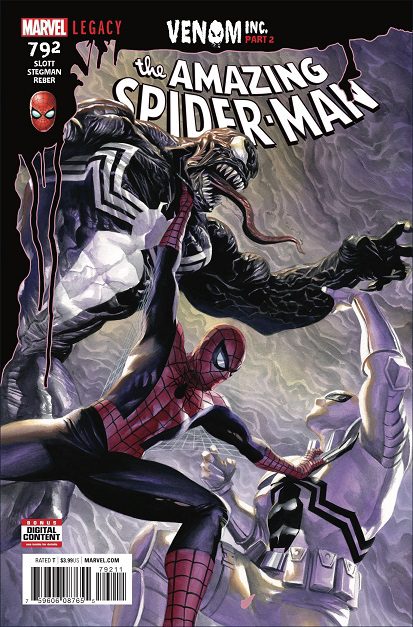 This issue picks up right after last weeks, with Flash Thompson now in the Anti Venom Suit. Flash rips the Venom symbiote from Eddie Brock and attempts to bond with it, this causes the symbiote to scream out in pain. Flash and Peter take off with the suit safely contained in a container. It cuts to Black Cat and her gang, she’s working on presenting a gift to the Five Families. In walks Lee Price and the rest of the gang that now have the Maniac Symbiote.

Peter and Flash end up back at Bobbi’s apartment, under the guise of using Peter Parker’s science equipment to stop the 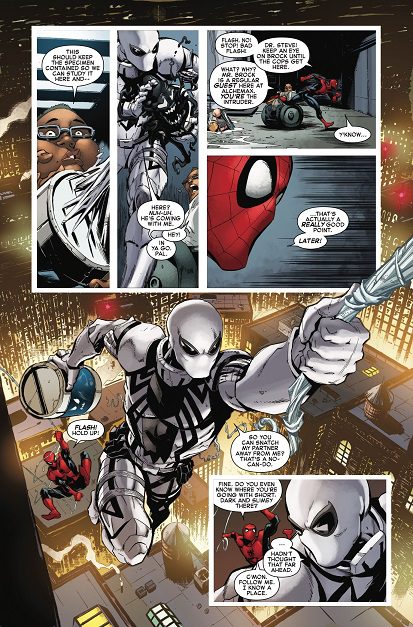 symbiote. It flips back to Black Cat, as Maniac slowly starts taking over her men. She wagers a one on one fight between them, winner takes all. Back at Bobbi’s apartment, Peter whips up a symbiote compass that uses a tiny piece of the symbiote to track other versions. He and Flash take off in hopes of finding it. It leads them to Black cats hideout, inside we see Black Cat and all her henchmen now sporting Symbiote masks. The story will be continued in Venom.

This takes place seconds after the last issue and really pushed the story along, a fantastic back and forth with Peter and Flash Thompson. Though Peter was a bit to obvious with the I’m not spider-man bit. The art was all around fantastic and Venom Inc. is shaping up to be an interesting event.