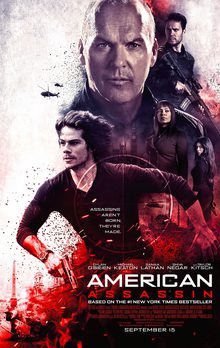 AMERICAN ASSASSIN follows the rise of Mitch Rapp (Dylan O’Brien) a CIA black ops recruit under the instruction of Cold War veteran Stan Hurley (Michael Keaton). The pair is then enlisted by CIA Deputy Director Irene Kennedy (Sanaa Lathan) to investigate a wave of apparently random attacks on both military and civilian targets. Together the three discover a pattern in the violence leading them to a joint mission with a lethal Turkish agent (Shiva Negar) to stop a mysterious operative (Taylor Kitsch) intent on starting a World War in the Middle East.

American Assassin was not the hotest film in the box office upon its release, and with reason. The film was a mediocre espionage film, which did have it’s moments but primarily relying on mind-less action. If you were looking for something along the lines of 007, this film does not quite hit its mark. There were some solid performances however, such as from the brilliant Michael Keaton, who was the one consistency in the entire film. The Blu-Ray, which is out now, does feature some extras which may provide some more in-depth details of the film.

Alamo Drafthouse Q&A (26 min): The Q&A features an interview discussion with stars Dylan O’Brien and Taylor Kitsch which was held at a special screening at Alamo Drafthouse. Some of the questions asked included their approach towards the film and how crucial it was to nail that horrifying opening scene. Kitsch goes into details on what it was like bringing a character into this world, who did not exist in the original novel.

Have you seen this:
Mandalorian Season 2 gets a release date.

Honestly, Keaton was the best portion of the film, with that said, I would have rather seen this featurette dragging out longer than some of the other features included in the Blu-Ray. Keaton stole every scene he was in. The special also digs into the intentions of both characters and their views between right and wrong. As we know, there were moments in the film that felt missing or could have been a bit fuller. This featurette includes a more in-depth view between their madness, the torture scene and the actions of Keaton’s character. At moments, while watching this, I do wonder if this film would have worked better as a sequel and instead the first film include Keaton and Kitsch’s characters time together.

Weaponized Training and Stunts (12 min):  This 12 minutes short provides a closer look at the action and choreography involved for the film as well as the rigorous training the stars went through, including feedback from Michael Keaton and Dylan O’Brien

Target Acquired (10 min):  This includes several behind the scenes footage as well as interviews with the cast and crew. Personally, one of the best moments when it comes to films, is attempting to piece together how specific scenes were shot. This featurette gives viewers just that.

Finding Mitch Rapp (10 min):  Dylan O’Brien discusses the importance of bringing his character to life and how it translate from book to film.

In the Field (9 min): The crew discuss the filming locations and the decisions behind them.

The behind the scenes features do it’s job by providing viewers with the entire process of bringing the film to life. If you are a fan of special features in general, then this covers just about everything you may want to know film. With that said, unless you absolutely loved the film, I wouldn’t imagine the included featurette’s are a must-see, with the exception of Transfer of Power Hurley and Ghost mainly because it features the one good consistency in the film, Michael Keaton.

What were your thoughts on American Assassin?