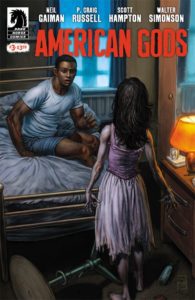 Shadow is already being thrown into the deep end, and now he has to deal with the mysterious resurrection of his wife. This comic book doesn’t really compliment the television show very well because it’s so faithful to the source material, but both are great separately.

The first time I read the scene where Shadow and Laura reunite it was a bit surreal. The creative team as a whole does a good job of capturing the casualness of the conversation. My only complaint is the fact that Laura doesn’t look very… dead. As she explains her affair with Robbie and death, you can’t really tell she has been resurrected outside of her white eyes. Story wise it was excellent, including the following day when Shadow confronts Wednesday about the whole ordeal.

The “Coming to America” sequence showed how the Norse gods made it to America. I prefer this take on the Viking travelers compared to the television series, because it feels more spontaneous and meaningless. Them being drunken fools that piss off the wrong people make it feel more real, compared to the Vikings calling on Odin to survive.

Shadow then gets to meet Czernobog and the three sisters. The sisters are shown briefly but we quickly get to Shadow being challenged to a game of chess. It is one of my favorite scenes from the book, so I’m excited to get to it in the next issue. The craziness is only just beginning. 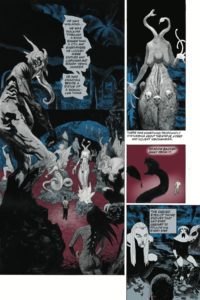 I have mixed feelings on the art so I’ll start with praising the lettering. It’s easy to overlook how good a job Rick Parker is doing with this comic book, but he is doing a fantastic job. There are other comics out there that are far less wordy than this one, which looks like a jumbled mess. There is a lot of information to take in with each American Gods issue, yet it’s always been easy to read. As for the art, I still like the stylized look of the series, but I felt this issue really needed something a bit more detailed. I think the covers to this issue did a better job of portraying Laura’s living dead look. It’s one complaint, but it still bothers me. The art team on the short dream sequence was phenomenal.

This issue had a lot in it; you’ll get your money’s worth. Even so, the story is well paced and features solid art. I’m very much enjoying this series, but maybe don’t read and watch American Gods simultaneously.

American Gods Comic book neil gaiman
Are you an Insider?News, reviews, & updates are just the beginning.