This past Saturday, Anthrax closed the show at the sold-out Los Angeles “KillThrax” tour stop and those in attendance witnessed an exclusive treat:  the band’s first-ever live performance of “Carry On,” the thrash legend’s cover of the classic Kansas song.  With shout-outs from fans for the band to play the song at the “KillThrax” shows, airplay on Active Rock stations across the country, more than 300,000 YouTube views, and even a “thumbs-up” for the cover from Kansas founding member Phil Ehart, the band decided it was time to play it live. 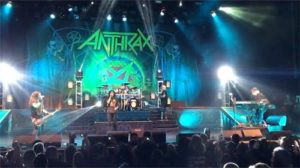 Anthrax fans are well aware that there is no keyboardist in the band and keyboards are prominent on this song, so the band enlisted the help of Fred Mandel to join them onstage at the Wiltern Theatre for the performance.  Mandel recorded the keyboards for the “Carry On” cover track and has played with icons from Alice Cooper to Elton John to Queen.