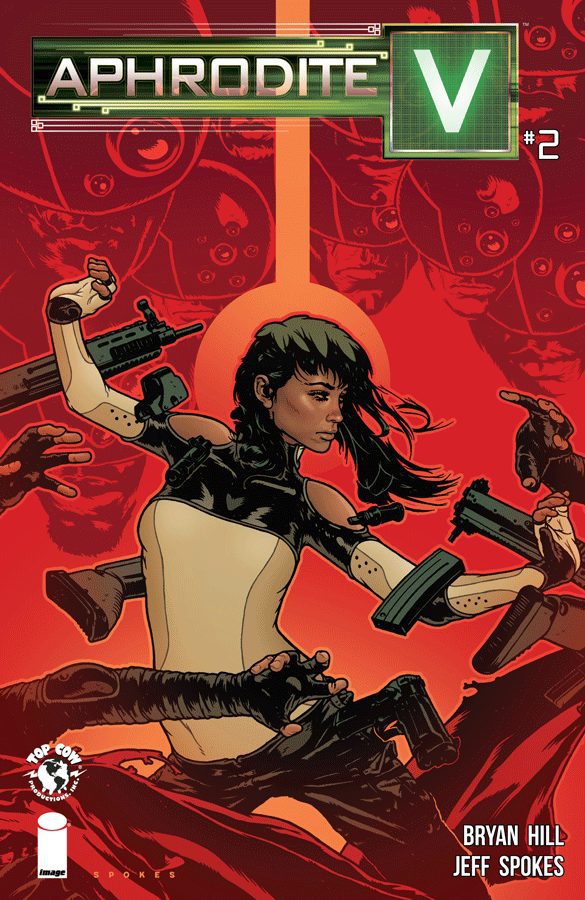 Aphrodite V #2 continues to build its story with some solid storytelling and action from the creative team here. This time around, we get more focus on Aphrodite. She decided to come over to Martin’s house because the two of are connected in a way due to the experiments Martin’s father was a part of. Aphrodite goes on to explain that she want’s control of her life and where to go in it. Even though she was made just to kill who ever she was assigned, her views on those types of orders have really changed because she was growing into her own person. Martin on the other hand keeps playing with the right cards that just drive him to gain more positive publicity. He’s a smart businessman and it’s clear he will do what he can to reach his goals, but I think the story that’s coming will test his morals.

The story also gives us our main antagonist and I like how he was introduced through his followers. With that, I have to talk about how the action sequences are illustrated here. It all happens very quickly but it really shows how precise she is when she takes down her opponents. The art team here was able to show how calm she is in her movement and the confidence in her eyes of how she knows she won’t fail. Aside from that, I think the art most of the times is very enjoyable but the color black is used a ton for characters shading, backgrounds, and even on the outfits so things seem to blend in a bit much where things just look dark in a scene like a low lit room. I do like how the color scheme emphasizes on the tone though because right now no one here outside of Aphrodite seems to be a true protagonist.

What makes this series fun is just how uncertain you feel about Martin and what his true goals are. Aphrodite while not having done anything wrong yet, does not mean she will turn around and do something for her own gain. We also now have to wait and see what our antagonist Basilisk has in store for them while deciding if we can really trust Aphrodite or Martin. It’s good to have likable characters but it’s great to never feel truly certain what everyone is going to do and I’m ready for more Aphrodite.