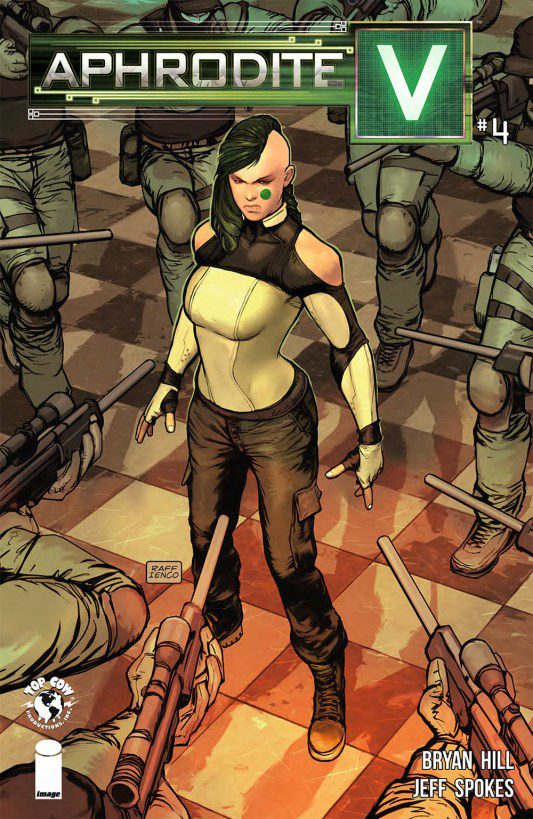 It’s the last issue for the arc in Aphrodite V as Hui-Men and Aphrodite are off to find Basilisk and stop him from destroying the world. Martin meanwhile is staying behind and being questioned by the police about Caitlin’s death that happened in the last issue. One thing I have to really give credit for in this series is it’s pacing. The amount of things that have happened over these four issues is quite amazing as I felt like I had read more than what was actually put out.

Reading how it all ends here does come off a bit quick, especially with the fight against Basilisk but it still delivers enough action. The team up with Hui-Men and Aphrodite has been one of the best parts recently and I’m glad to see the chemistry between the two continue. They work so well together from how they help each other in fights to the small jokes they make towards each other. Martin has been an interesting guy. He’s shown lots of perseverance to see this fight come to an end with this “god”. Even though he’s nowhere near the fight right now, his role is still important. He’s being asked about Aphrodite and he tries to assure them that she isn’t the one to be afraid of. They still don’t really know what she is but her actions have proven that she’s not like what Basilisk is, which is a monster.

The art here is still enjoyable and a big highlight with its great style and blends of colors. The panel work never strays away from being something super creative like you may find in other issues but the flow still works here and we’re still given a great splash page of Aphrodite and Hui-Men as they begin their showdown. The creative team here has done a wonderful job no introducing readers to Aphrodite while giving us other great characters to latch on to. They kept it small with only focusing on 3 characters, which worked perfectly for these first four issues. When its all over, Aphrodite is finally clear on what her mission is. It may not have been what she was originally built for. But she seems to have finally found her place. This last issue was very satisfactory on all points. I do wish the fight against Basilisk went on a bit longer but the finish was still great. It’s been a fun ride so far and I do hope we see more of Aphrodite in the future.

Have you seen this:
Peninsula (Review)
Aphrodite