Extreme metal giants ARCH ENEMY have released their live DVD/Blu-ray As The Stages Burn!, which features the band’s largest and most impressive stage production to date filmed at Wacken 2016!

“As The Stages Burn!” is available as a Limited Deluxe CD+DVD+Blu-Ray Box Set, Special Edition CD+DVD Digipak, Gatefold 2LP+DVD and as a digital album. 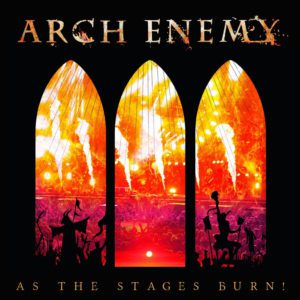 The DVD/Blu-Ray also contains Behind The Scenes footage from Wacken, as well as excerpts from the “Tokyo Sacrifice” live DVD, all “War Eternal” music videos and a new, previously unreleased video clip for “Time Is Black” as bonus material! The Deluxe Box Set comes with an Artbook including  CD, DVD and Blu-Ray, pop-up art, lanyard and “As The Stages Burn!” laminate.

Watch Michael and Alissa presenting the Deluxe Box Set in this video: