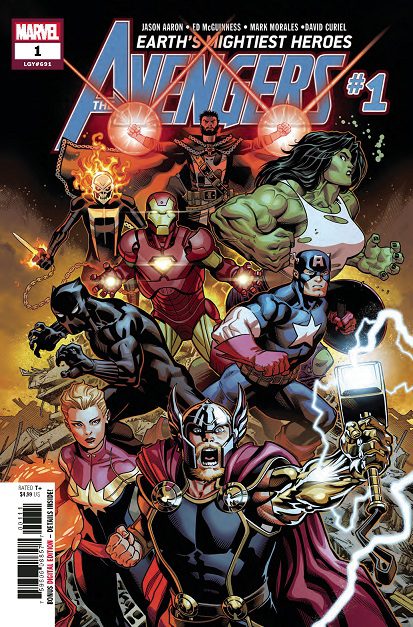 History’s largest opening box office weekend for what is destined to be the summer’s most successful movie. Free Comic Book Day bringing scores of lapsed and new superhero fans into shops around the country. An Avengers comic with the inviting numbering that promises a new jumping off point for any reader. This convergence of corporate planning results in a fun, but safe introduction to what will become the new Avengers roster.

The creative team of Jason Aaron and Ed McGuinness deliver a solid opening to what should be a very enjoyable cast of heroes. The dialogue between the three core members (Steve Rogers, Tony Stark, and Thor) plays off of references to their long history and sometimes rocky relationships, but remains accessible for new readers. Readers familiar with the past few years of Thor, Captain America, and IronMan will appreciate the significance of the three of them sharing a drink while acknowledging their individual baggage. At the same time, newer readers familiar with the movies will have enough understanding of their characters to enjoy the scenes. The dialog between Black Panther and Doctor Strange is witty and provides some readers with a quick take on their personalities. She-Hulk is given limited attention, but given her strength and intelligence has the potential to change the traditional Hulk team dynamic. The inclusion of Ghost Rider deviates most from previous Avengers rosters, but ties in well with the connection to the Avengers B.C.

Back in the fall of 2017, Marvel Legacy #1 introduced readers to Odin’s mystical Avengers and Avengers #1 revisits them, connecting their conflict to the coming Celestial confrontation. Aaron and McGuinness create a roster with ancient ties to the Marvel universe, and this coming Avengers roster will reflect those ties of magic and myths alongside earthly and cosmic powers. These two teams, ancient and current, have a parallel story and common enemy which hopefully will play out over this first arc.

Avengers #1 is a fun, but by the numbers, Avengers first issue. The story of disparate heroes uniting to fight an enemy greater than any of them is well-trodden territory, but it is also the common thread that assembles every Avengers team.