The Good
This movie starts off with one of the best introduction sequences I could recall. It doesn’t take long at all to really set the high intensity, fun, and exhilarating tone that this film carries throughout. That leads me to really congratulating the real heroes of this movie: the stunt drivers.

The stunt doubles/drivers in Baby Driver are the real MVPs here. Seriously, the stunts that they pulled in many of these crazy chase scenes were nothing short of amazing. The car chases seemed very reminiscent of the type of driving someone could only pull off in a video game. (Especially if you had some cheat codes.)

Without question, all of the driving in this movie becomes the top highlight. So much so that you even look forward to the moment characters use a car. Baby (played by Ansel Elgort) was really fun to watch as he basically used a car as his primary weapon. It almost felt strange to see him outside of a car. Whenever he was in danger, or if things got tense, an instant feeling of relief would arise when he got himself into a car. Overall, I think that Elgort was able to carry the film sufficiently with the aid of the exceptional supporting cast.

The supporting actors shared really good on screen chemistry. I really liked how none of the characters really over took the movie, but instead they each shined in their own way. Jamie Foxx definitely is more than entertaining in his role as “Bats”. I’m always a fan of Kevin Spacey, and Jon Hamm certainly delivers as well. More importantly, many of the characters are not stagnant in their roles. This is primarily due to the great direction and writing of Edgar Wright.

Edgar Wright brought this movie to life from a very practical and organic place. The humor was well timed and the intensity was turned up at the right times. The writing and dialogue of the characters were a great fit to really help propel the story. I appreciated the fact that nothing was overly simplistic, nor was it completely predictable either.

The Bad
This may be hit or miss for some people, but the music/song selections didn’t always resonate with me. I know music can be really subjective so this was a risky move either way. The timing of the songs, and how they were used throughout the film were good. However, unless you’re familiar with the songs being played, you may miss out on the full impact that comes whenever you hear your favorite song come on.  It’s kind of like when you’re at a club, and the DJ plays some random song you never heard of before. You understand how others may enjoy the music, but it just may not vibe with you per se.

The Reason
Baby Driver is really a fun movie to watch. The movie puts an original twist on traditional heist movies. If there was an additional song or two, this could’ve almost passed for a musical. It’s full of exciting chase scenes that make you feel like you’re in the driver’s seat. May even have you thinking that with a little practice you could pull off similar stunts. (Please don’t.) The movie looked like a real life video game (a la Grand Theft Auto).

If you’re a fan of Edgar Wrights movies (Hot Fuzz, Scott Pilgrim vs The World) then you’ll definitely enjoy this film as well. This may go down as the director’s best movie. With a 2017 summer that’s had a few letdowns, this should serve as an unexpected pick-me-up. Feel free to plan your weekend to check this out. 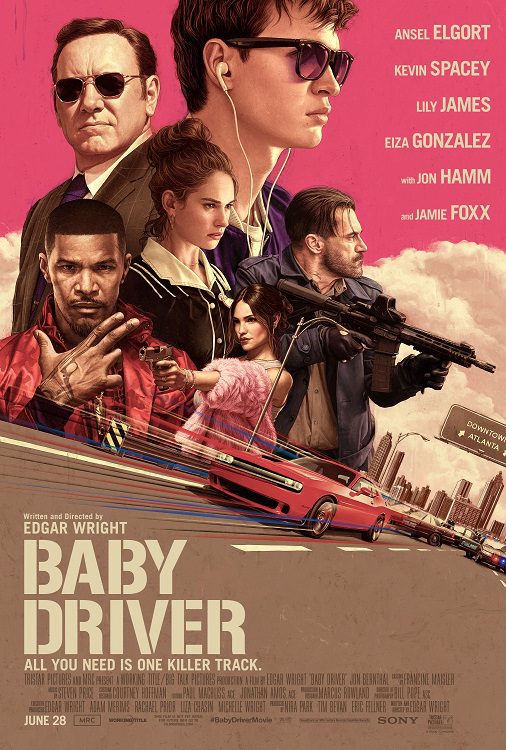