Though I never owned a Super Nintendo growing up, when I first was introduced to the great RPGs of the console, EarthBound was one of the highly recommended titles to play.

But as much as I tried, I couldn’t get into it.

Fast-forward 13 years to the release of EarthBound on Wii U’s Virtual Console and I was willing to give it a shot again. I bought it within the first week of release and played about a third of it in about the same amount of time. But then I got stuck and moved on to something else without even trying to play EarthBound again until a couple of weeks ago.

Now that I’ve finished the game, I can easily say that while it’s not the best RPG I’ve played, it certainly was charming and well worth checking out for any fan of classic Nintendo games.

In EarthBound, you play as Ness, a young boy with Psychic powers tasked with saving the world from an evil entity known as Giygas. Despite the seemingly cliche nature of children saving the world from evil, EarthBound is anything but cliche. The whole game is brimming with charm and quirkiness, feeling far less Japanese in its environmental design, enemies, music, etc. than many other JRPGs. And the random, quirky nature of the humor often made me smile or chuckle. Things like what Ness’ hometown is famous for and a certain set of five bosses that each tell you (in some different way) that they are the third strongest of the bunch are some of my favorite examples.

I suppose that’s something to be proud about…

The enemy designs are also a lot different than what you find in most RPGs in general, let alone JRPGs. One moment you’ll be fighting a miniature flying saucer or a robot, the next you’ll be fighting a New Age Retro Hippie, Unassuming Local Guy or a Cranky Lady. There are no random battles; all enemies appear on the map and many of them can be avoided or surprised from behind.

“Time for you to return to Mother Earth, Man.”

Like with many JRPGs, Earthbound has a turn-based battle system, meaning there’s more time to deliberate on what attacks you want to use each turn and to strategize rather than having to react quickly. What makes the battle system unique, however, is that when an enemy does damage to your character(s), your health diminishes on dials (like a slot machine or an old alarm clock), meaning that even a hit doing “mortal damage” can potentially be stopped by healing your character(s) before the dials get down to 0. That doesn’t mean the game is easy, however. While it isn’t necessarily as difficult as other RPGs from the SNES era (or earlier), it has enough challenge in that mistakes can still spell doom and even with the time to heal a dying party member, PP (Psychic Points–used for any PSI, i.e. magic) can run out quickly and the sheer scarcity of items that restore PP (even in shops) make it difficult to keep your party members healthy.

Where things can also occasionally be difficult is in the very limited space to carry items. Each character can carry a maximum of 21 items including equipment, which takes up 4 of those slots. While that might seem like it’s a completely reasonable amount of space, it fills up quickly and certain key items (which also take up slots) are necessary to carry most of the time. Oftentimes I found myself needing to toss or use an item that I didn’t need to use just so I could fit a better item in my bag. And considering items don’t stack (e.g. 2 Hamburgers take up 2 slots), it was really difficult to carry all of the items needed. It is possible (using any phone in game and calling Escargo Express) to store items separately from your characters, but certain items have to be on certain characters at all times. Ness, for example, has 4 key items plus 4 pieces of equipment that should be on him always, leaving slots for only 6 total items. 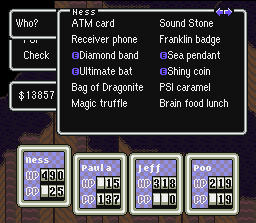 With needed key items and equipment taking up space and same items not stacking, the item management of this game is the most frustrating aspect.

Then there’s the reality that for most of the game, the ability to revive a fallen character is limited to using one of the rare items that do that or taking them to a hospital. Ness eventually gets a quick-travel ability to help with this, but when 3 of the 4 party members have fallen and Ness is left facing a difficult boss by himself late in the fight, it can be a significant challenge to stay alive.

However, this is where the Wii U Virtual Console’s version’s feature of Restore Points comes in handy.  With a tap of the Gamepad’s touchscreen or the press of a single button (which can be configured as desired), it is possible to save literally anywhere, at any time. Obviously, those wanting to experience the game as close to the original do not have to use this feature, but without it, saves are done by calling Ness’ Dad at any telephone. There are almost no telephones in dungeons, though, so those wanting to play with the classic method should be prepared to redo entire dungeons when they die. Regardless of which save method is used, once a dungeon’s boss is defeated, all of the enemies in the dungeon will do their best to avoid Ness and his party, meaning players will not, for the most part, have to face enemies again on the way out of dungeons. Furthermore, when Ness becomes a certain amount stronger than enemies, many of them will die without even having to enter a battle.

Restore points really do make all the difference in this game (even though the screen above is not from this game).

Those playing on Wii U Virtual Console have the option to play on the TV or the Gamepad, but can also use a Wii remote turned sideways, the Wii’s Classic Controller (which, apart from the extra shoulder buttons and joysticks at the bottom feels very similar to the SNES controller), or the Wii U Pro Controller. The nice thing is that apart from the Wii Remote, all of the options for control maintain the same d-pad and button layout of the SNES controller and make it a very smooth experience.

Despite some complaints about the item management and difficulty to restore PP or revive allies at crucial moments, EarthBound is still a very charming and quirky RPG that is highly enjoyable. With fun, humorous writing, a different take on the “children saving the world” cliche so common in JRPGs, and a very unique feel, it’s well worth playing in whatever form possible. Wii U’s Virtual Console, where it’s $9.99 USD, is easily the cheapest method, though collectors who are willing to shell out the considerably higher amount of cash for the SNES cartridge (which easily goes for $100-200 USD minimum) do have that option. Regardless, EarthBound is absolutely worth any gamer’s time.

That’s good advice for us all.

Earthbound SNES Virtual Console Wii U
Add your voice!Join the conversation on Discord...
Join Our Discord