In the late 1980s, software releases for the NES were among the most popular electronics in the world. With Nintendo’s determination to continue the growth of their product, they focused on improving all the aspects of their games. In doing so, people with vast musical experience were approached to compose pieces for popular games. Quality of composition improved noticeably and evidence of their achievements in video game music remains relevant to this day. Composers who made a name for themselves with their software include Koji Konda (Super Mario Bros., The Legend of Zelda), Miki Hugashino (Teenage Mutant Ninja Turtles, Gradius) and Hirokazu Tanaka (Metroid, Earthbound).

Many of the upper tier titles in the NES pantheon have iconic music that catches our ears and ignites our memories of the countless hours in Mushroom Kingdom or Hyrule. There are, however, masses of lesser known games that have amazing compositions. Here we will focus on some games that don’t quite hit the mark with gameplay but exceed their poor design with great music.

Tim Follin, legendary composer for such classics as Ghouls n’ Ghosts and Rock n’ Roll Racing, is the main redeeming factor of this game. With control of the titular character, Silver Surfer is a side-scrolling action game that features popular Marvel villains Reptyl, Fire Lord, Possessor, and Kylor (yeah, those guys). The sprite work is passable however the gameplay is fundamentally broken and most players won’t see past the first stage. Fortunately we now have the ability to listen to songs to stages we never saw, with Silver Surfer being a title that hid some amazing tracks. Flurries of synth leads in the style of Joe Satriani’s guitar, Follin packed the game with memorable tracks that would fit in well on any Yes album.

Have you seen this:
'New Mutants' director Josh Boone slammed for alleged racism

Now this is an easy plot to enjoy: the mysterious Planet X appears when Pluto and Neptune switch positions in the solar system, and its inhabitants begin an attempt to conquer the Earth. Sounds pretty great, right? Unfortunately Godzilla: Monster of Monsters falls into the same trap as most of the Godzilla games: how do you have fun and deep gameplay with an overpowered monster? The player fights as either the King of Monsters or Mothra, with side-scrolling levels and boss battles taking up most of the play time. Notable villains Matango, Dogora, and Goten make appearances however clunky controls and slow speed limit the fun. The true value in this game is in the Japanese inspired music that accentuates the size of the creatures. Through driven bass oriented themes mixed with Toho Ltd. Style melodies, Godzilla: Monster of Monsters is a prime example of atmospheric music in an NES game.

Mr. Gimmick follows a Yumetaro, a small green toy that was given to a young girl as a birthday present. One night, the girl’s other toys become jealous of Yumetaro and kidnap the girl, taking her away to another dimension. Through a variety of levels, it’s up to you to shoot some stars and save the day. As a late game to the NES collection, director Tomomi Sakai used innovative techniques to create high quality graphics and sound in order to compete with the SNES. Mr. Gimmick composer Masashi Kageyama uses an expanded sound chip which provided more sound channels than a standard NES game, allowing for richly textured music and audio.

Dragon Spirit: The New Legend is a vertical shooter that plays similar to 1942 and Tiger Heli. The player controls a dragon that uses fireballs to destroy enemies. Mixed reviews and poor localization buried this game on the console and while the gameplay is not as flawed as some of the other games on the list it still tends to be lacking. The music however is exactly what you’d want from a game about dragons. Driving melodies further build the sense of danger and pacing, acting as a great score to the difficult fast paced gameplay.

In this makeshift sequel to the excellent Goonies movie, Mikey and the Goonies have been kidnapped by the Fratellis. Now Samwise… I mean Mikey, must rescue all six of his friends and free a captured mermaid named Annie. Of all the games on this list, this is probably the one I actually enjoy most. It is nostalgia layered on nostalgia, with mediocre gameplay that allows me to at least enjoy the game and recognize characters from the movie. The score harkens back to the themes of the original movie while also giving us some variations and new songs. Goonies II does an incredibly job of recreating well known songs, something that other games such as Ghostbusters failed to do.

What are you favorite video game soundtracks? Do you listen to them away from the game? Comment below and stay tuned to GWW for Part 2 of Bad Games with Good Music. 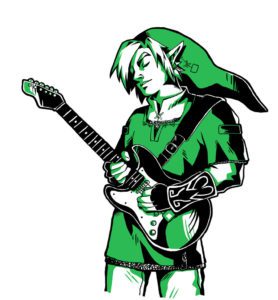