Batgirl and the Birds of Prey #22 Review 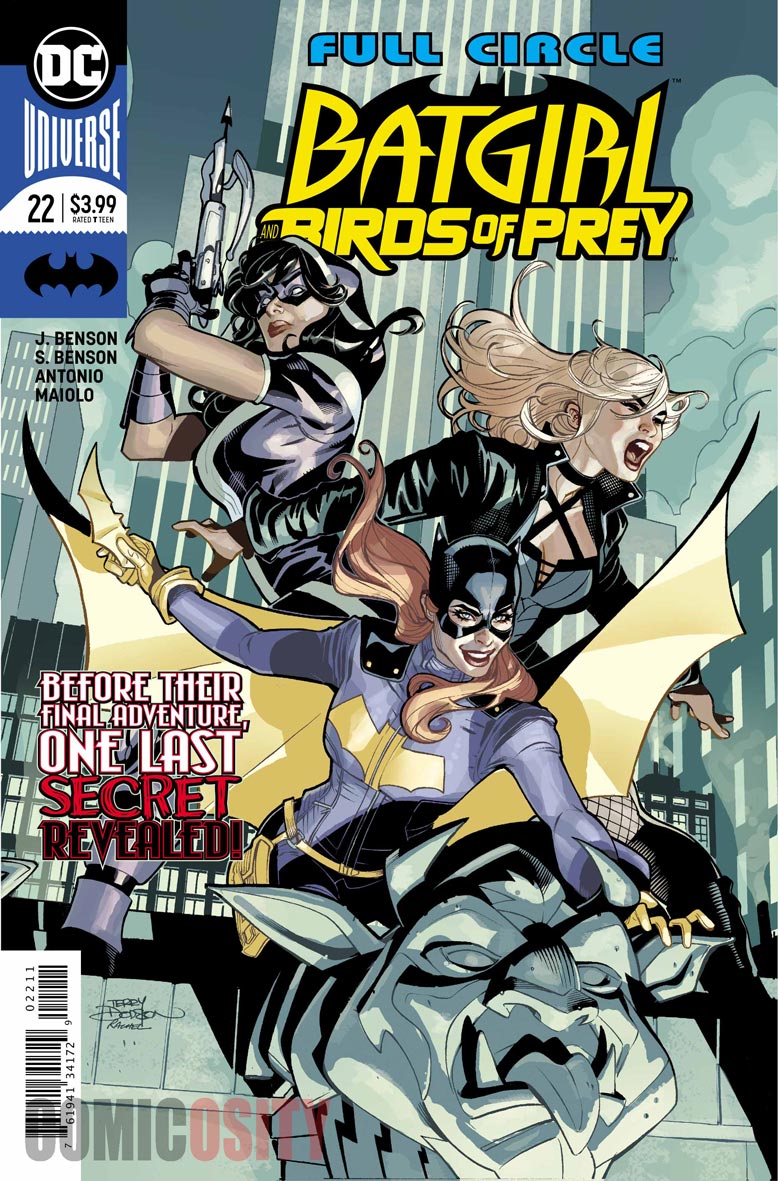 Batgirl and the Birds of Prey #22
DC Comics

Batgirl and Black Canary must track down Huntress who has been captured for information on Oracle. The Birds of Prey prepare for their last battle with The Calculator in this final issue of the series.

I’ll express my thoughts on this series as a whole, and the future for the creative team a bit later. As for this last issue, I thought it was a very good ending that tied up every thread while leaving the characters in a great position to return as a strong cohesive unit when DC Comics decides to bring them back. Because the New 52 reboot decimated the group as we knew them, and the writers were tasked with the challenge of recapturing a friendship and team dynamic that had taken years to cultivate. Yet, by the end of the issue, they really did feel like a family again. The Calculator wasn’t as menacing as he should have been, but his obsession with finding out Oracle’s identity made for a good overarching story. It was far better for Barbara Gordon to tackle her past persona head-on rather than sweeping it under the rug like it never happened. Blackbird made for an interesting villain/mentor for Black Canary, I wish we could have gotten more of that. And of course, there was the Huntress storyline of her dealing with her estranged mother. It ended the only way it could have, and lead to an emotional but refocused Helena. This issue, much like this series, was exactly what it needed to be.

Have you seen this:
Mayhem Brawler (Review)

Roge Antonio was the perfect artist to have finished the series. That’s not to say that the other artists were bad, but Roge captures the perfect tone for these characters. His style is a bit more mainstream than the others but still has that touch of brightness and whimsy. One of my favorite moments was the three consecutive panels of Huntress noticing a Batarang and then smiling with confidence. Just a small thing that shows just how far the team has come along, from complete strangers to trusted friends.

I actually went back to my old reviews of this series to get an idea of how well I liked it. I enjoyed it enough to complain in every review about how people were sleeping on how solid each issue was. Julie and Shawna Benson not only had to reboot the team but also anchor their writing to the Batgirl of Burnside-young adult style that Barbara must be written as now. Not my thing, but not everything has to be written to my tastes. This series, however, seemed capable of reaching a wider audience if they added a bit more edge to it, which is why I was sad to hear it was canceled. I thought the Benson’s had it in them to do some really interesting stuff. Luckily, we will get to see for ourselves now that the sisters will be helming Green Arrow. They have the Dinah and Oliver relationship down pat, I expect to get a healthier couple than the one we currently are getting. I’m excited to see the passion and love for the Birds of Prey transfer over to the green archer. I just hope their Green Arrow run isn’t as underappreciated as this one was, because they succeeded in every way they needed to with Batgirl and the Birds of Prey.

Julie Benson and Shawna Benson had one job: bring the Birds of Prey back together. They succeeded and did so with a very solid run. They should be applauded and DC has rightfully rewarded them with the Green Arrow series. Sad to see the Birds go, but when they return it will have this run to thank for setting them up.