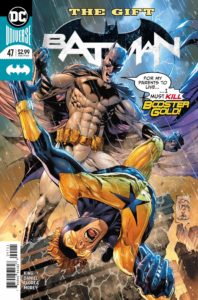 Two years have passed since Booster Gold got everyone killed. So Bruce Wayne must travel back in time to stop him and save his parents.

The finale to The Gift story arc was as hectic and maddening as the prior two issues. Booster Gold was incredible and his injection of humor in what should be tense situations made every panel that he was in the highlight of each issue. This was more his story than it was Batman’s. Even with all the deaths, this arc had much-needed levity before what is sure to be a terrifying next few issues with The Joker. Tom King is the master of short-form storytelling with his ability to take you on an emotional roller coaster within a single issue. This was a really strong three issue arc.

I think there were only two problems that stood out to me. The rules of time travel were thrown out the window and it was chaos. Everything was fixed a little too easily too. Also, the ending bothered me a bit. So, unless Batman is going to mention what occurred in future issues, his and Catwoman’s reactions to Booster’s failure of a wedding gift was unsatisfying. Spoiler alert: they said nothing, and showed no emotion whatsoever. I get the humor in them deadpanning all the craziness, but it was a disappointing ending to a great story. I’d have been pleased with any little reaction.

Tony Daniel did an amazing job in capturing each character’s emotions during tragic events. The emoting was great and I loved the call back to the first issue with Booster. I liked the unkept Booster Gold who was locked up in a cave for two years till Bruce needed him. His design looked like someone who had seen better days, he even looked malnourished in his own costume. This was some really beautiful artwork.

A strong final issue to a great story arc. It falls apart some toward the end, but that doesn’t take away from how great this story was. Tom King seems to have found his groove with Batman and isn’t making a bad issue.